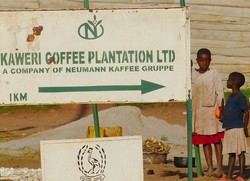 Witness Radio | 18 September 2019
Villagers displaced by Neumann Kaffee's plantation face another land grab in Mubende, Uganda
SIGN THE PETITION HERE
On August 18, 2001 the Ugandan army violently expelled over 400 local peasant families - 2,041 inhabitants - from their land in Mubende districts in the villages of Kitemba, Luwunga, Kijunga and Kiryamakobe. By way of these forced evictions, the Kaweeri Coffee Plantation Ltd., a subsidiary of the German Neumann Kaffee Gruppe, erected its first large-scale coffee plantation in Uganda, the largest of its kind in East Africa.
The evictees formed an association, ‘Wake Up and Fight for your Rights’, and have tried unsuccessfully ever since to gain some justice and compensation for their losses. A large number of the displaced families were forced to migrate to other parts of Mubende in search of lands where they could re-establish some small-scale farming. Many resettled on a 323-ha area of land covering the villages of Kambuye, Kikono, Kyabaana, Kanseera and Lwensanga.
Late in 2018, a Ugandan businessman named George Kaweesi started coming to the area. He told the resettled families and other local villagers that he met that he owned the lands they were living on. Many of the villagers had occupied this land for generations, and had large farms of coffee and eucalyptus trees. But with no reasonable compensation offered, Kaweesi ordered them to immediately vacate ‘his’ land.
On October, 12th 2018, in the dead of the night, Kaweesi and a gang of hundreds of men armed with machetes, hoes, axes and sticks invaded the five villages and hacked and destroyed anything and anyone their eyes landed upon. Once the violence had subsided, one person was dead and over 3,000 others had been rendered destitute; cruelly stripped of dignity, deprived of shelter and a source of livelihood.
On the apparent orders of Kaweesi and his armed gang, Mubende police, led by DPC Martin Okoyo, then arrested 28 of the victims – including community land rights defenders – and illegally detained them for weeks at Mubende Central Police Station. The victims were eventually arraigned before Mubende Magistrates Court, where nine charges were filed against them, including murder and aggravated robbery, before they were remanded to prison. The victims’ request for bail was rejected by Justice Joseph Murangira because “the land sale agreements they presented were of low value”. Since December 2018, these people have been on remand without trial.
In the meantime, Kaweesi and his bandits have since erected a makeshift camp on the victims’ land where they are now staying under the protection of police officers and a private security company as they clear the land for unknown purposes.
Only one family, headed by 31-year old Ssetimba John, still occupies their plot on the land Kaweesi is claiming. But John’s family, which includes his aged mother, siblings and young children, has nothing to eat because Kaweesi’s men destroyed all their food. John says he continues to receive threatening calls from Kaweesi, while his family members receive constant death threats from members of Kaweesi’s gang that routinely carry out night surveillance of their home. John says Kaweesi has been pestering him to accept UGX 2 million (about USD 539) to “facilitate” their move off their 80-acre piece of land on which they farm commercial crops and eucalyptus trees.
With the help of lawyers and a civil society organisation, John’s family and other victims of the illegal eviction petitioned Mubende High Court a few days ago, desperately seeking justice. However, the victims in prison have been blocked by prison officials from filing evidence in support of the Petition, allegedly due to orders from some judicial officers involved in the case.
There is also evidence of coordinated efforts to prevent the prisoners from receiving effective legal representation, including anonymous threats directed against the lawyers.
Information received by Witness Radio indicates that 28 community land rights defenders from the five villages are to be put on trial this September in a special criminal session, Witness Radio has initiated a petition for people from inside and outside Uganda to sign. The petition calls for the immediate release of these 28 land defenders.
SIGN PETITION HERE
Meanwhile the struggle of ‘Wake Up and Fight for your Rights’ to get justice and reparations continues. Sadly, this new land grab case is still linked to the first land grab by the Neumann Kaffe Group. Before the first land grab case is resolved, the second land grab is already taking effect.