Land conflict between villagers and PHC-Feronia in Lokutu, DR Congo: Violent arrest of many community leaders 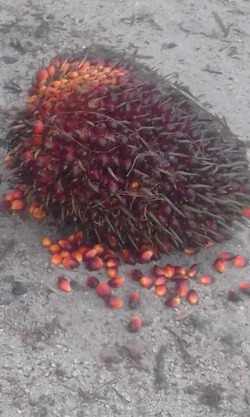 Photo : RIAO-RDC
RIAO-RDC | 17 Septembre 2019
Land conflict between villagers and PHC-Feronia in Lokutu, DR Congo: Violent arrest of many community leaders
Between 12 and 16 September, the national police arrested numerous villagers from communities involved in an international mediation process regarding the occupation of their land by the Canadian palm oil company Feronia Inc (PHC-Feronia in Lokutu). These arrests were made violently in the middle of the night and follow a meeting between community leaders and members of the German development bank's complaint mechanism panel. The villagers confirmed to RIAO that the police officers were accompanied by the security guards of PHC-Feronia.
RIAO-RDC denounces the threats and attacks by PHC-Feronia targetting members of the communities that mandated RIAO-RDC to file a complaint on their behalf with the complaint mechanism of the DEG (German development bank) so that ultimately the Congolese communities can have their claims against this Canadian company heard at the international and national level.
The complaint process is the only option for these communities to advance with their demands and to have their rights restored as the true owners of the lands that have been illegally occupied by Feronia since it acquired the plantations from the Unilever Group without the consent of the rights holders.
In addition to the case of the murder of a Pygmy couple in 2015 in Boteka (another PHC-Feronia plantation site) because of their use of palm fruits for cooking and the murder of our RIAO-RDC colleague Joël imbangola last July (despite the ongoing mediation process regarding the complaint mechanism of the DEG and the Dutch FMO which both finance PHC-Feronia), their are increasing attacks by PHC-Feronia against RIAO-DRC staff and the Community Leaders involved in the complaint who refuse to be corrupted by Feronia.
Thus, on the 12th of this month, several members of the Yalifombo community, including the chief ISWETELE and his notables, were kidnapped at night by a police delegation led by a Major of the Congolese national police and loaded into a PHC-Feronia-Lokutu Jeep under the mandate of the Prosecutor General of Kisangani in Tshopo province.
On the night of September 15, Mr. Mombulu Boyoma Alphonse, the traditional chief of the Mwingi community, was kidnapped at midnight with rags in his mouth, after the police fired tear gas into his 8-hectare palm farm. This was the second time he was arrested in this manner this year.  After being beaten and tortured, he managed to escape into the river, but three members of his village were taken and their whereabouts remain unknown. While the police officers, working in association with the security guards of PHC-Feronia, were torturing him before his escape, they told him that they would shoot all of the villagers and then they would see if RIAO- RDC would save them.
Chief Mombulu Boyoma Alphonse issued a statement to RIAO calling on the DEG and all international organisations to support their efforts to advance with the mediation process as fast as possible before they suffer further harm for standing up for the truth and their rights!
Thus RIAO-DRC calls on the DEG and the other development banks that fund and hold shares in Feronia to take all measures possible to ensure that PHC-Feronia respects the human rights and dignity of the communities, peasants and workers who are mistreated like slaves on their own lands and above all that it takes not further action to impede the communities from pursuing a mediation process which can enable them, for the first time, to express their vision for the lands which have been so catastrophically occupied since the colonial era, so that peace can finally be achieved in this part of the DRC whose population is already suffering from the ravages of wars from East to West and from North to South.
We make an urgent appeal to all international human rights organisation, land defenders and other concerned groups to get involved in this situation, which is evolving from bad to worse despite the peace process that is under way.
FOR RIAO-RDC
JEAN-FRANÇOIS MOMBIA ATUKU
PCA
TEL: 00221773469621
SKYPE: JFMOMBIA
GOOGLE: JEAN-FRANÇOIS MOMBIA
GOOGLE: RIAO-RDC
Original source: RIAO-RDC