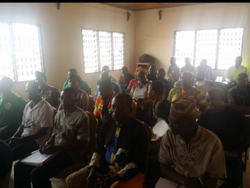 Representatives from the community of Nyete (Photo: Kiven Brenda)

The community of Nyete, in the Ocean Division of the South region have expressed concerns over a new palm project which will occupy over 3000 hectares of their land, despite the fact that other companies operating in their community have brought more harm than good to them.

They expressed their frustration at the conference hall of the Divisional Officer of Nyete, Mbotiji Hotison Babila, on Thursday September 12, during a meeting to evaluate the social and environmental impact of the new palm project on the population on Thursday.

The project to be carried out by a company called CAMVERT Sarl involves the cutting down of trees that occupy over 60,000 hectares of land along Nyete and Campo subdivisions of the Ocean Division. They are to establish a palm oil production unit and a processing agro-industrial complex.

A group of Cameroon civil society organisations on the 14th of August, wrote a statement against the said project, stating it would have serious consequences on the community.

The Chief of Adjab in Nyete, His Majesty Ebande Charles during the meeting, said he was not comfortable with the decision permitting CAMVERT to carry out its objectives, given the fact that, the presence of other oil companies such as Helvecam and Socapalm, hasn’t brought much change to the community, as it is still impoverished.

The area to be exploited by CAMVERT Sarl, is currently home to varied species of wildlife, and it is feared that with trees cut down, these animals will be forced to look for new habitat and some might die along the way.

Civil Society Organisations dealing with the environment and maintenance of wildlife species indicate that animals such as elephants, Buffaloes, great apes live within this 60,000 ectares of land, which also harbours rich flora such as rare semiaquatic species.

They are also worried about the increase in land pressure and the fact that the decision undermines Cameroon's commitment to the process of promoting sustainability in certain agricultural value chains gearing towards deforestation.

Despite a plan and solutions presented by a consultant from the Ministry of Forestry and Wildlife on how to manage social and environmental risks, the population is still uncomfortable with the project.