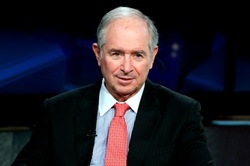 A Brazilian company owned by a top donor to Mitch McConnell is significantly responsible for the ongoing destruction of the Amazon rainforest, carnage that has developed into raging fires that have captured global attention. I have a story out today on Stephen Schwarzman’s financing, through his firm Blackstone, of a controversial port and highway project in the Amazon that is facilitating the surging growth of agribusiness concerns there, and the resulting deforestation of the Amazon. (Schwarzman, who made more than $500 million in income last year alone, is going to become an increasingly public figure in the wake of David Koch’s death, I predict.)
When I asked Blackstone about the project, they made the argument that, actually, it’s good for the environment, because the port allows for the transport of grain and soybeans by waterway, which is far less energy intensive than trucking it out, and therefore reduces net carbon emissions. And that’s true! In a vacuum. But it neatly reveals the self-destructive insanity of the capitalist view of the world. To firms like Blackstone, it’s only a question of how grain from the Amazon region can be exported to the rest of the world more efficiently, not whether it should be. On the other side of the debate are those who worry about our continued ability to support life on this planet, arguing that the Amazon needs to be preserved in order to stave off a climate apocalypse, and that developing the region with ports and highways undermines that.
Meanwhile, Blackstone has also launched two funds dedicated to buying farmland in Brazil and other South American countries, working with Brazilian companies, which helps them get around laws restricting direct foreign ownership. Blackstone now has more than $500 billion in assets under management. That’s an absurd amount of money for one firm to have, and it’s been able to grow to that size thanks to policy choices that the U.S. has made, largely with its tax code, to encourage the rapid accumulation of capital, and to privilege investment funds like Blackstone. Those massive pools of private capital need projects to invest in, and torching the Amazon to convert it to temporary farmland (before it becomes equatorial desert) is as good as any other. So while my story is critical of Blackstone, the real problem is that companies like Blackstone are allowed to exist. Blackstone is well aware of that, which is why they pump so much money into the political system, and particularly into the coffers of of McConnell and Trump.
I’m starting to think that Bad News might not be a dour enough name for this newsletter.
Full story is here.
Original source: Bad News
TWITTER
FACEBOOK
WHATSAPP
PRINT
E-MAIL
TWITTER
FACEBOOK
WHATSAPP
E-MAIL