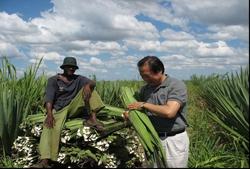 An 80-member business delegation from China's Shandong Province will arrive in the country on Wednesday for a four-day business and investing scouting mission.

Once in the country, the delegation mission organised by the Department of Commence of Shandong in collaboration with Tanzania Investment Centre and East Africa's Commercial and Logistics Centre Chamber of Commerce (EACLCCC), will have two days each in the mainland and Isles.

"Their intention is to explore the Tanzania market for a friendly exchanges and common development of bilateral relations and mutual development between Tanzania and China," Ms Wang told reporters yesterday.

EACLCCC, registered this year, has so far attracted 400 members mostly from Tanzania and designed to foster mutual business and investment relation for Sino-Tanzania.

The delegation will look on how to scale up agriculture export and import trading in the area of agriculture equipment and products.

They will also discuss general situation regarding financing import and export trades as well as Sino- Tanzania trade financing programme.

"The delegation will also look on the possibility of direct import and export, cutting a third part country.

"For instance, China is consuming a lot of beef from Tanzania but mostly imported through Kenya," Ms Wang said.

Once in the country, the delegation will be hosted by the Prime Minister's Office (Investment), Ministry of Industry and Trade, Ministry of Livestock and Fishery, TIC, Export Processing Zone Authority (EPZA) and EACLCCC. Shandong is the third wealthiest province in China with a GDP of 1.156 trillion US dollars last year.

It is also one of populous with over 100.5 million people as of this year's census.