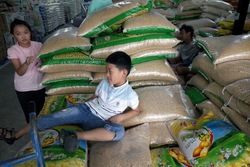 China warned it should not pin its hopes on Russian soybeans plugging supply gap caused by US trade war
by Orange Wang
Russian soybean exports to China are likely to remain low for the next few years, an agricultural specialist has warned, suggesting that amount produced will not be enough to provide a real alternative to the United States.
China suspended purchases of US soybeans and other farm products this month after US President Donald Trump threatened to impose more tariffs on Chinese products, compounding the shortages caused by 25 per cent tariffs on the crop that have been in place since July last year.
Russia is one of the many alternative sources China has been exploring since the start of the trade war and last month it approved imports of soybeans from all parts of Russia, opening itself up to supplies from the European part.
Although Russia’s overall production of the crop – a vital food source for farm animals – is much lower than America’s, some in Beijing hoped its northern neighbour would be able to make a significant contribution in future.
Last month China’s Commerce Minister Zhong Shan said the country hoped to “deepen its trade in soybeans” with Russia after a meeting with his counterparts in Moscow, days after Rusagro, a Russian agricultural exporter,had shipped its first bulk vessel of soybeans to China.
But Dmitry Rylko, director general of the Moscow-based Institute for Agricultural Market Studies, said Beijing should not pin its hopes on this new source of supplies.

“In the next few years, European Russia’s soybean exports to China may be very low,” Rylko told an annual gathering of Chinese soybean growers, traders and officials in Harbin, the capital of Heilongjiang on the border with Russia, on Friday.
He said soybean output in the European part of Russia would not be able to satisfy domestic demands until 2024, despite an increase in plantation areas.
Since Russia still needs to import soybeans to fulfil its own needs, it was unlikely to provide an effective answer to China’s problems, Rylko added.
He also warned that many of the European soybeans were not of particularly high quality because they were relatively low in protein.
He predicted that the best-case scenario would see Russian soybean exports reaching 2 million tonnes a year – a significant rise on last year’s total of 800,000 tonnes.
However, that is still a drop in the ocean compared with China’s annual consumption of more than 100 million tonnes – some 88 per cent of which were imports, including 16 million tonnes supplied by the US.
Chinese Customs figures also show that between October last year and March this year, Russian soybean imports actually fell – from 589,000 tonnes to 469,000 – compared with the previous period last year.
However, there is still strong Chinese interest in developing Russia as a supply base.
Yang Baolong, the president of the China Soybean Association and the chairman of the Heilongjiang Agriculture Investment Corporation, said Russia’s vast far east has the potential to become “an important source of soybeans” and urged Chinese businesses to “seize the chance”.
His view echoed earlier statements from the Chinese commerce ministry, which called for deeper cooperation between China and Russia.
Joyvio Beidahuang Agricultural Holdings, a Harbin-based company, is one of the Chinese enterprises moving into Russia.
The company has bought 7,660 acres of land in Russia to grow soybeans, corns and rice, Ren Jianchao, the firm’s chief executive officer of Joyvio Beidahuang, said.
He said the soybeans harvested there will be shipped back to China, and even though production from Russia is too small to make an impact for now, it has potential.
“Russia is so close to China, it still has low land costs and clear advantages [for growing soybeans],” Ren said. “When I was driving in Russia, I saw much abandoned farmland beside the road.”
Shi Yanguo, head of the food engineering school at the Harbin University of Commerce, said that China could diversify its supply strategy further by renting lands overseas to grow the crop.
He also said the country should look beyond Russia and two of its major suppliers, Brazil and Argentina.

“There are other suppliers in South America, like Paraguay … Canada is also an agricultural powerhouse and has a lot of farmland,” he said.

He said that the huge demand from China for soybeans would encourage other countries to produce more of the crop to full the gap in the market left by the US.
“That will take some time, since soybean is an annual crop,” he said, “The supply this year might be tight, but the situation next year will be better.”
Original source: SCMP
TWITTER
FACEBOOK
WHATSAPP
PRINT
E-MAIL
TWITTER
FACEBOOK
WHATSAPP
E-MAIL