Why is no action being taken to arrest the killer of DR Congo land defender Joël Imbangola Lunea? 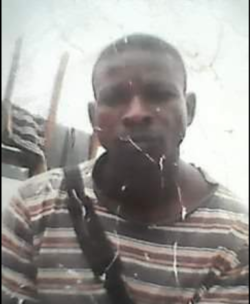 Twenty-four days have passed since land defender Joël Imbangola Lunea was brutally killed by Canadian palm oil company Feronia Inc.'s chief of security at Bempumba, in the Province of Equateur of the Democratic Republic of the Congo (DRC). Joël Imbangola Lunea was a member of the DRC non-governmental organisation Réseau d'information et d'appui aux ONG (RIAO-RDC).
Over 115,000 individuals and more than 120 organisations from the DRC and around the world have signed on to petitions calling for an investigation into Mr. Imbangola's killing and and immediate arrest of the murder suspect. Despite the international outcry, local police have failed to take action and arrest the murder suspect even when they were aware of his whereabouts.

RIAO-RDC issued a communiqué on 22 July 2019 when the first reports of the murder were received.i Over the past two weeks, RIAO-RDC staff have been further investigating Mr. Imbangola's murder and providing support to his family.

However, the eyewitness testimonies provided to RIAO-RDC indicate that local police officers were present on the shore of the riverbank when the murder of Mr. Imbangola took place on the Momboyo river, at the village of Bempumba. The police took no action to arrest the suspect, Mr. Boketsu Ebuka (alias “Ebola”), as he disembarked from his boat at close distance from the police station, prepared to go into hiding and spent nearly two weeks at a known location in the forest, a short distance from Bempumba. From there, he was able to move to the city of Mbandaka. Although the exact location of his whereabouts in Mbandaka was communicated to the Mbandaka police, no arrest was attempted during the five days he was known to be there. We now understand that he has left Mbandaka by boat to an as yet unknown location.

Based on numerous testimonies from eyewitnesses and local sources provided to RIAO-RDC, we can now confirm the following information pertaining to the brutal killing of RIAO-RDC member Mr. Imbangola:

- Mr. Imbangola was a skipper, transporting people and goods on pirogues (traditional long boats) between Bempumba and the nearby villages and the provincial capital Mbandaka.
- On the morning of Sunday, July 21st, Mr. Imbangola told his wife that he was worried for his safety because of Feronia's harassment and aggressive defamation of RIAO-RDC.
- Later on the 21st of July, Mr. Imbangola and his assistant mechanic were preparing to leave with three heavily loaded pirogues when they were approached by a daughter of Mr. Boketsu. Mr. Imbangola refused her request that they take her large bag of leaves used locally for wrapping chikwanga (cassava bread) because the boats were already heavily loaded and they feared the additional bag would have put them in danger of sinking. The woman told him she would call her father.
- As Mr. Imbangola and his assistant set off into the river, a boat carrying Mr. Boketsu approached them, with Mr. Boketsu reported to have yelled: "I’m going to kill you even if I have to go to court. It’s too much with you people from RIAO." (Note that this was said with local Lingala expressions, so it is not a literal interpretation).
- In the ensuing attack by the security guard, Mr. Imbangola's assistant tried to come to his aid but was thrown into the water and his foot was badly cut by the propeller.
- Mr. Boketsu then began to beat Mr. Imbangola and Mr. Imbangola fell overboard. Mr. Boketsu then used a paddle to strike him hard on the arm and on the head after which Mr. Imbangola's body disappeared below the surface of the water.
- Without attempting to rescue Mr. Imbangola, Mr. Boketsu brought his boat and Mr. Imbangola's pirogues back to shore. Several policemen were among the crowd at the shore at this time and are said to have witnessed the incident. They did not stop Mr. Boketsu as he disembarked nor when he was at his home preparing to leave with his family into hiding. For nearly two weeks, Mr. Boketsu Ebuka was hiding at a location known to the local people in the forest a short distance from Bempumba.
- Joël Imbangola Lunea's body was found three days later in the river. It showed evidence of a fracture to his head and his arm caused by the blows from the paddle.

Feronia/PHC was aware of Mr. Boketsu's violent behaviour towards local communities prior to the incident. Local staff at Bempumba say that several complaints were raised with company managers about violent actions committed against villagers by Mr. Boketsu but that the company took no action to address the situation and instead Mr. Boketsu was promoted to a higher rank.
Also of grave concern is the increase in militarization at the Boteka plantation site in the weeks following the killing of Mr. Imbangola: a curfew has been issued and military presence has increased. This increase in military presence is already leading to more harassment and terrorisation of villagers, with more lives of community members being put at risk.
The killing follows months of intimidation directed at members of RIAO-RDC and community members affected by the Feronia-PHC plantations who have been working with RIAO. RIAO-RDC is supporting nine communities who in November 2018 submitted a grievance with the Independent Complaints Mechanism (ICM) of the German, Dutch and French development banks against the company's occupation of their land. While the central issue of the grievance is the illegal occupation of community land by Feronia/PHC, the complainants note frequent escalation of conflicts between security personnel working in the plantations and community members. We recall that Mr. Imbangola's murder has taken place in this context of company personnel harassing villagers and Feronia Inc circulating information to discredit RIAO-RDC.

It is this atmosphere of impunity, intimidation and harassment that created the breeding ground for the violence that ended Mr. Imbangola's life.

Twenty-four days have passed since Mr. Imbangola was brutally killed. Action to hold those responsible for this brutal murder and to arrest his killer is overdue!
For more information, please contact: