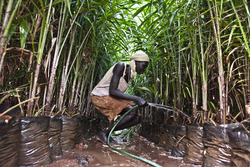 Among the six companies studied, India based Karuturi Agro Products PLC was operating on 100,000 hectares but only achieved 30 percent of its target in five years. (Photo: Alfredo Bini)
The Reporter | 10 August 2019

A development and environmental scholar, Atkyelesh G.M. Persson has found out that foreign large-scale firms engaged in the Ethiopian agricultural sector have failed to deliver on productions and argued that most of the companies studied have been found to meet the minimum standards of a “responsible investors”, The Reporter has learnt.

In an exclusive interview with The Reporter, Atkyelesh said that her findings indicated that six major foreign firms engaged in the food and biofuel crops production in Benshangul Gumuz and Gambella Regional States have failed to meet a pro-poor investment criterion that glances through the environmental, social and economic standards.

According to the expert, BHO Bio Products PLC, Karuturi Agro Product PLC, Ruchi Agri PLC, S&P Energy Solutions PLC, Saudi Star Agricultural Development PLC, and Toren Agro Inustries PLC are the companies that were selected and investigated. These case studies found projects to be failing in all aspects of operations. When viewed from the investment profiles, the companies have severely fallen short of achieving production targets.

Among the six companies, India based Karuturi Agro Products PLC was operating on 100,000 hectares of commercial farm and was found only to achieve 30 percent of its target in five years. However, Karuturi was expected to achieve its 100 percent performance within two years of coming into operations. The company was longing to harvest wheat, rice, soy beans, palm, sugar cane and the likes.

Next to Karuturi, once well received Saudi Star Agricultural Development PLC, owned by Mohammed Al Almoudi, the Saudi citizen with an Ethiopian origin, had performed even worse. The study reveals that Saudi Star has managed to execute only 3.5 percent of its total planned productions in five years than the 100 percent target the company has envisaged to harvest in four years. Saudi Star was expected to produce rice as a major commercial crop mostly for export to Saudi Arabia.

The remaining companies from India and one from Turkey have all underachieved. For instance, S&P Energy has attained a seven percent actual performance in four years while it planned to cultivate 50,000 hectares of land with biofuel crops, in five years, in Benshangul Gumuz Rgional State. It ended up dry.

The stories are more or less the same with the rest of the FDI companies in agriculture. The failed large scale farms, according to Atkyelesh, are partly the results of investors’ lack of expertise and skills. The main driving motives for the investors joining commercial farming in Ethiopia relates to the 2008 and 2009 global financial and food crisis. In an attempt to seize such windfall opportunities, many have flocked into Ethiopia but ended-up with a regrettable endeavor, Atkyelesh said.

In addition to investors’ shortsightedness, public institutions inefficiencies and lack of monitoring capacities have exacerbated the damages FDI firms have already inflicted to the environment and to the communities living across the farm lands. The companies have acquired wetland savannas, forest lands, and most depressingly, they had also been given parts of land inside the Gambella National Park. Some of the investment projects caused flooding to villagers who were perfect strangers about the coming of these large scale farms to their vicinities.

A fulltime employee of the United Nations Economic Commission for Africa (UNECA), as a program officer, Atkyelesh is an MSc graduate of Lund University and a PhD holder from the University of Cape Town. With her 20 years of research and academic life, her recent work, Foreign Direct Investment in Large Scale Agriculture in Africa: Economic, Social and Environmental Sustainability in Ethiopia, is one of her scholarly contributions to Ethiopia. This book, published by Routledge, as part of contemporary Africa series, recommends the government, private sector and the academia to further investigate the potential damages, large scale farms have perpetrated in Ethiopia and beyond.