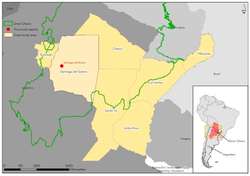 Map of Argentina showing location of Santiago del Estero. Source: Authors.
We examine collaborations between the state and civil society in the context of land grabbing in Argentina. Land grabbing provokes many governance challenges, which generate new social arrangements. The incentives for, limitations to, and contradictions inherent in these collaborations are examined. We particularly explore how the collaborations between the provincial government of Santiago del Estero and non-government organizations (NGOs) played out. This province has experienced many land grabs, especially for agriculture and livestock production. In response to protest and political pressure, two provincial agencies were established to assist communities in relation to land tenure issues (at different stages). Even though many scholars consider state–civil society collaborations to be introduced by nation states only to gain and maintain political power, we show how rural communities are actually supported by these initiatives. By empowering rural populations, active NGOs can make a difference to how the negative implications of land grabbing are addressed. However, NGOs and government agencies are constrained by global forces, local political power plays, and stakeholder struggles.

Social movements (as represented by non-government organizations; NGOs) and governments increasingly collaborate to jointly address social and environmental issues. However, the ability of alliances between NGOs and governments to contribute to social equality has been questioned. Many scholars of Latin America have analyzed these collaborations, especially in the context of progressive, popular, left-wing governments. According to these scholars, the ultimate goal of these collaborations is to gain and maintain electoral power and build legitimacy for their policies and practices. Conversely, these collaborations potentially allow people who were previously excluded to have political voice. These collaborations exist at the municipal and provincial levels, as well as at the national level.
This paper explores how land grabbing challenges existing policy regimes and provokes changes in governance arrangements. The incentives for, limitations to, and contradictions inherent in the collaborations between the state and NGOs are examined by focusing on land grabbing in Argentina. Land grabbing and the resultant conflict over access to land encourages various actors to interact, including individuals, social movements, NGOs, governments, and companies. In Argentina and elsewhere, global demand for commodities trigger land grabbing, altering governance at all levels. By facilitating corporate entry, the state (represented at national, provincial, and municipal levels) plays a central role in land grabbing. The state tends to represent economic market interest rather than community interest. Land grabbing threatens social justice, because access to the resources of local communities becomes restricted. In Argentina, both formal and customary land tenure is recognized, creating a clash between investors and local communities. Many social movements protest against land grabbing and its effects. The exacerbation of unequal land distribution resulting from the commodity export boom in Argentina was a factor in encouraging NGOs to form alliances with government and/or to publicly endorse government policies in the hope of improving the situation of rural people. Given the diverse role of the state and the nature of the legal system, land grabbing in Argentina is taking place in a context of legal and institutional pluralism. This context creates a variety of challenges for the effectiveness of the collaboration between NGOs and the provincial government.
To understand these collaborations, we build on the concepts of ‘governance’ and ‘collaborative governance’ in their various forms, including state-society-capital nexus, and policing. Uitermark and Nicholls (p. 975) define policing as the attempt by the state “to neutralize and pre-empt challenges to the legal and social order … and refers to the range of governmental technologies, rationalities and arrangements—partly centrally orchestrated, partly self-organized locally—developed to align subjects with the state.”
Governance is a concept that implies the presence of a diverse set of actors in the political and social arena. In this paper, governance is defined as a system of regulation involving the interactions between and within a variety of actors across geographical scales, and includes the socio-institutional arrangements in which the actors participate. The interactions between the various levels of government, civil society, and market actors leads to constant renegotiation, restructuring, and readjustment of their roles, responsibilities, and interests. In theory, governance aims to empower people and create equal opportunities for people to participate in decision-making. However, in practice, this does not always occur. Local communities are often excluded from decision-making, or not given equal say. According to McKay, rather than empower local people, governance is sometimes considered to advance the agendas of companies and governments. Nevertheless, in certain situations, NGOs might be formally included in government structures. These collaborations may result in jointly addressing various social issues, for example programs for education, housing, public health, waste management, and environmental issues. However, state–civil society collaboration can also imply a narrowing of the operational domain of NGOs due to the restrictions imposed by the government.
We consider the governance dynamics of state–civil society collaborations in the province of Santiago del Estero in Northern Argentina. For decades, there have been many major conflicts over the way agricultural expansion has played out in this province, including murders, death threats, physical harassment, and the burning of crops and houses. After an alarming period of social unrest due to agricultural expansion and consequent political pressure by social movements, the provincial government established two agencies to assist rural communities to improve land tenure security and reduce land conflict. These agencies are ‘El Registro de Poseedores’ (a registry of informal landholders) and ‘El Comité de Emergencia’ (the Emergency Committee), and are cooperations between the state and NGOs, including Movimiento Campesino de Santiago del Estero (MOCASE), the Peasant-Indigenous Movement of Santiago del Estero. The establishment of these agencies can be analyzed as being the result of left-wing Latin American governments granting decision-making power to civil society with the goal of avoiding further social conflict. In the academic literature, the potential co-optation of NGOs within government structures is much debated. It is therefore interesting to analyze the mechanisms and characteristics by which this takes place in the agricultural expansion in Argentina. As McKay suggests, such collaborations pose questions like: Why do these collaborations arise?; how do these collaborations work?; and is society transformed for the betterment of rural communities by these collaborations? This paper offers a theoretical overview of the different perspectives on collaborative governance, specifically in the context of NGOs collaborating with the provincial government. This perspective has been under-studied to date, and therefore this focus brings an original contribution to the governance of land grabbing.
Read the full paper here