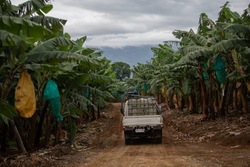 A banana plantation in the village of San Jose, in the province Mindanao. Hundreds of families from the tribe of Manobo-Higaonon were displaced when their houses were demolished in July 2018 by local security men following a court order in favor of a businessman occupying 307 hectares of their ancestral domain. (Photo: Jeoffrey Maitem / Global Witness)
Civil Eats | 31 July 2019