Enemies of the State? 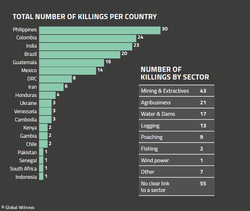 Enemies of the State?

How governments and businesses silence land and environmental defenders
More than three people were murdered each week in 2018, with countless more criminalised, for defending their land and our environment.
Calls to protect the planet are growing louder – but around the world, those defending their land and our environment are being silenced. More than three such people were murdered on average every week in 2018, with attacks driven by destructive industries like mining, logging and agribusiness.
This year, our annual report on the killings of land and environmental defenders also reveals how countless more people were threatened, arrested or thrown in jail for daring to oppose the governments or companies seeking to profit from their land.
These are ordinary people trying to protect their homes and livelihoods, and standing up for the health of our planet. Often their land is violently grabbed to produce goods used and consumed across the world every day, from food, to mobile phones, to jewellery.
Download the full report: Enemies of the State? (PDF, 3.8MB)
They say we are terrorists, delinquents, assassins and that we have armed groups here, but really they’re just killing us.
- Joel Raymundo, member of the Peaceful Resistance of Ixquisis movement

Julián Carrillo knew he was in danger long before his body was found riddled with bullets in October 2018. He was the sixth member of his family to die in two years after opposing mining on their community’s land in Mexico.
Days earlier, gunmen had massacred nine men, women and children over a long-running land dispute on the island of Negros, in central Philippines.
And in Iran, renowned academic Kavous Seyed-Emami died in prison in suspicious circumstances, one of nine environmentalists jailed over accusations that they were using their work protecting cheetahs as a cover for spying.
Because many other deaths go unrecorded, the figures in this report are almost certainly a sizeable underestimate. Nonetheless, the stories it tells show how a growing demand for land to meet consumer demand is driving deadly violence around the world.
CRIMINALISATION OF DEFENDERS
But deadly violence is only the most visible of the myriad threats that defenders face.
Across continents, governments and companies are also using countries’ courts and legal systems as instruments of oppression against those who threaten their power and interests.
That’s why this year, for the first time, we have documented the many ways that defenders are being criminalised, including:
Criminalising defenders in this way makes attacks on them seem legitimate, making them more likely. These trends continue across the globe, helped by populist politicians who are stripping away vital environmental protections when we need them most.
HOW TO STOP THE SILENCING
The failure of many governments and companies to act responsibly, ethically or even legally is a major driving force behind crimes committed against land and environment defenders.
Businesses have a duty to ensure their customers are not unwittingly supporting projects that drive people out of their homes or devastate ecosystems. Consumers have a right to demand that these companies live up to their responsibilities.
Moreover, as our investigations have shown, the projects driving these environmental and human rights abuses are often funded by ordinary people’s savings or investments, more often than not without their knowledge. From energy to agriculture, so-called development projects in much of the world are driving rampant deforestation, mass displacement and climate chaos.
Governments, investors and business all have the power to protect the environment and those that defend it. Ordinary people – as consumers, pension holders and voters – can help make these changes happen.
As we hurtle towards climate breakdown, it is more important than ever that we break the cycle of silence that allows the powerful to trample over human rights and the natural world. We must ensure that the voices of land and environment defenders are heard.
We all live on the same planet. We are all connected by our shared humanity. We all share a common future that will be defined by what we do to protect our environment. If you agree with this idea, then stand with defenders and support their voices.
Original source: Global Witness
TWITTER
FACEBOOK
WHATSAPP
PRINT
E-MAIL
TWITTER
FACEBOOK
WHATSAPP
E-MAIL