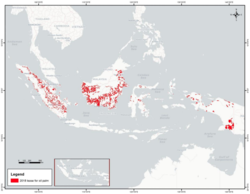 In 2017, CRR reported 6.1 million hectares (ha) of forest and peatland remained on oil palm concessions, land that can be considered “stranded assets." This update discusses figures and trends in the palm oil industry since 2017 and argues that oil palm development on forest and peatland will remain economically unviable for the foreseeable future.

Key Findings:
• Since 2017, issuances of new concessions for oil palm plantations in Indonesia have come to a near halt while deforestation rates have dropped. As of May 2019, 22.3 million ha have been issued as oil palm concessions in Indonesia, equal to 12 percent of the country’s land cover, and 6.4 million ha of forest and peatland remain within concessions. This area represents 28.4 percent of the total area under oil palm concessions.
• Undeveloped forest and peatland remain stranded assets in the palm oil sector. The economic viability of oil palm development on forest has come under increasing pressure. Such development is non-compliant with responsible sourcing policies, while non-compliance sanctions have become more severe and detection more likely. The company groups that hold the largest tracts include Indogunta, Hayel Saeed Anaam Group, and Korindo.
• Demand for recovery and restoration to compensate for past deforestation is an emerging trend. Some companies require suppliers on their grievance lists to recover and restore deforested land in order to maintain or regain supply contracts. Oil palm growers may be forced to recognize and settle liabilities for past deforestation.
• Companies with stranded land in 2017 have used a range of strategies to handle these assets. Gama stopped all deforestation to regain entry to NDPE markets. HSA Group used an opaque ownership structure to deny involvement in a controversial project. Austindo Nusantara Jaya opted to service the leakage market. Korindo explored the biofuels market after NDPE suspension.
• A possible solution to the stranded land conundrum is to allocate social forestry programs on stranded land. At least one oil palm grower has dedicated CSR budget to support communities to apply for social forestry allocations with the Indonesian government.