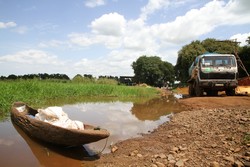 Baro River, Itang; an area which may be affected by Karuturi Global’s return to Gambela. (Photo: Creative Commons)
Illegal Deforestation Monitor | 27 June 2019
Karuturi Global‘s Ethiopia return stokes fears of deforestation and evictions
A 15,000-hectare concession awarded to Karuturi Global in Ethiopia’s Gambela region has left locals fearing their ancestral lands will be cleared for agribusiness once again by the Indian firm, an activist group in the region has claimed.
Karuturi said in an April note to shareholders that it has a new land deal for crop cultivation in Western Gambela, almost two years after exiting Ethiopia after a previous attempt at food production failed.
The firm was initially awarded a 300,000-hectare concession in the Jikawo and Itang districts of Gambela in 2009 for various crop production.
However, Karuturi failed to develop a successful agribusiness operation. Under terms of the 50-year lease agreement, the firm had to develop 100,000 hectares within two years but by 2014 only around 1,200 hectares had been cultivated.
Its failures were compounded when 92 workers filed a complaint with Ethiopian authorities in 2013 accusing Karuturi of delaying wages, breeching safety standards and failing to provide adequate housing.
The initial lease coincided with the controversial ‘Villagization’ program, a government-run scheme whereby thousands of people living in Gambela were forcibly removed from their homes to new settlements. Human Rights Watch and others said the program was in effect a government ploy to entice foreign land investors to the region.
Anywaa Survivors Organisation (ASO), an Ethiopian NGO that monitors environmental issues in Gambela, and HRW accused Karuturi of being complicit in evictions and deforesting land used by communities. Karuturi rejected the claims.
The failure of Karuturi, whose main business is floriculture, to diversify into food commodities led the Ethiopian government to cancel its original lease agreement. The firm left Ethiopia in 2017.
A legal challenge was tabled disputing the decision, but the case was dropped after Indian and Ethiopian diplomats reportedly intervened to help Karuturi agree a new 15,000-hectare concession.
ASO and GRAIN, a non-profit that promotes community-led farming, have called on the deal to be scrapped. The NGOs argue that Karuturi’s return will cause widespread forest destruction in Gambela’s Itang district and force locals, who had returned to the region after Karuturi’s 2017 exit, off the land again.
“People moved back to where they were, and vegetation had started to grow again but the fear is looming over them that Karuturi will start clearing the land again,” Nyikaw Ochalla of ASO told IDM.
“The locals will not be able to farm because if Karuturi is in that vicinity they will not have access to land they have owned for generations and the government could evict them at any time saying that the land belongs to Karuturi.”
It is unclear where the new concession will be but Ochalla believes it will be in the same area where Karuturi had its original lease with soy, palm oil and maize crops reportedly to be grown.
Ochalla told IDM that the readiness of government to support foreign land investors is putting local communities and surrounding forested areas at risk.
“These people have lived on this land for generations and the indigenous population who have lived on that land do not have any protections,” he said.
“By allowing foreign companies to invest then the government of Ethiopia will have a chance of controlling the indigenous population which were previously autonomous and culturally and linguistically distinct.”
The new 15,000-hectare concession has been approved by authorities in Gambela and is now awaiting approval from central government, according to Ochalla.
“The local population are very resistant to Karuturi returning. The initial excitement of Karuturi leaving has turned to anger and confusion because they do not know what will happen,” he said. “We are still monitoring the developments and we hope it won’t take place.”