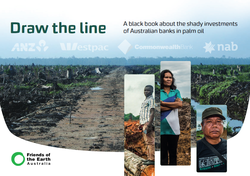 A new report by Friends of the Earth Australia reveals that four Australian banks are failing in their attempts to prevent their money from being used to fund rainforest clearing, land grabbing and human rights violations. Download the report here
Australia’s big four banks are financing companies accused of land grabs, deforestation and labour abuses in developing countries.

ANZ, the Commonwealth Bank, NAB and Westpac have funded, directly or indirectly, companies accused of improperly acquiring land from local people, child labour violations and land clearing, according to a new report by Friends of the Earth Australia.

The report compiled dozens of allegations of systematic human rights abuses in the supply chains of companies and subsidiaries in the palm oil trade financed by Australia’s largest banks.

Between 2010 and 2018, the big four banks’ total financial involvement - including loans, underwriting, bond holdings and shareholdings - was at least $6.4 billion in six major companies involved in the palm oil supply chain, the report says.

However, the banks appear to be reducing their exposure to the controversial product, reducing their financial involvement with companies in the palm oil supply chain by more than $13 billion since 2014.

The criticism comes at a bad time for Australia's banking industry as it reels from the Hayne Royal Commission which found the banks were motivated by greed and have regularly put profit ahead of its clients' best interests.

Palm oil is a common ingredient in products ranging from ice cream, toothpaste, shampoo and chocolate.

The report alleges the geographical scale of the abuses is widespread, ranging from Indonesia - a country that has been at the centre of criticism of the supply chain - to Nigeria, Uganda and Liberia.

None of the banks commented on specific client relationships, but all reiterated their commitment to continual assessment of the environmental and social impacts of those they provide credit to.

Westpac, ANZ and NAB went a step further and said if customers do not meet the human rights standards set by the bank, they may decline further funding or exit the relationship.

"If any clients are identified as operating outside the law, or do not meet our requirements, we will engage those clients and, if appropriate, we may exit the banking relationship," a spokesperson from Westpac said.

ANZ said where customer practices are not consistent with the bank's policies, and customers are not willing to accept their standards "in an appropriate timeframe, we may decline financing or exit the relationship".

But last year an Australian government investigation by the Australian National Contact Point found one of the banks, ANZ, had failed to meet its own human rights standards when it financed a Cambodian sugar plantation that was linked to forced evictions.

One company, Wilmar International, which has repeatedly been granted funding extensions by all four banks, has consistently been linked to human rights abuses that span several decades and numerous continents.

Between 2010 and 2017, ANZ, Commonwealth Bank of Australia, National Australia Bank and Westpac extended credit worth almost $3 billion to Wilmar International and its subsidiaries, the Friends of the Earth report says.

In 2014, Wilmar International made a promise to stop itself and its suppliers cutting down tropical forests for land.

To demonstrate they were genuine about cleaning up their act, Wilmar joined the Earthworm Foundation, an organisation dedicated to finding solutions to environmental problems. However, as of April this year, Wilmar International is no longer an Earthworm Foundation member.

A 2016 report from Amnesty International also exposed allegations of human rights abuses perpetrated by plantations run by Wilmar, including accusations of child and forced labour.

Some accusations against the Singapore-based company and their subsidiaries stretch back to the 1990s, and include deforestation, labour rights violations and land grabs.

Wilmar's sustainability spokesman said they constantly and consistently engage all stakeholders and partners, including financial institutions, and asserted they are now 100 per cent deforestation free consistent with their "No Deforestation, No Peat, No Exploitation" policy.

Large-scale palm oil manufacturing is lucrative and the market for the product is massive. But start up costs are high, meaning organisations often turn to banks for maintenance loans and cash to establish production.