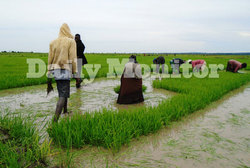 KALUNGU, Uganda, June 27 (Xinhua) -- A large expanse of lush green rice paddies is a major highlight along the highway from Uganda's capital Kampala to the southern part of the country.

The 3,000 acre rice farm, with a target of reaching 6,000 acres here in the central district of Kalungu, is owned by Zhong's Industries Ltd, a private Chinese enterprise.

At the farm, workers from across the east African country are busy working.

At the section of ready to harvest rice, dozens of youths battle with swarms of birds that come to feed on the rice. As a daily task, they whistle, shout and flap to scare away the birds.

"I wake up at six in the morning to go and scare away the birds. We are a group of several youths who do this," 24-year-old Brown Mfitundinda told Xinhua in a recent interview.

Several hundreds of meters away, combined harvesters are busy as tractors ferry the harvested rice to the rice processing facility also located on the farm.

At the facility, there are huge sun drying areas where the rice from the field is spread out on cemented floors by several dozens of youths mostly women.

After the drying the rice is ferried into the processing facility where it is milled before it is packed in 50kg bags with inscriptions "Zhong Yi" rice.

Zhong Shuangquan, managing director Zhong's Industries Ltd, told Xinhua in a recent interview that there are over 1,200 local employees and five Chinese working on the farm.

The Chinese largely offer technical expertise especially in preparing the land for cultivation, technology, machinery and sales, according to Zhong.

He said planting, cultivation, harvesting and processing and sales goes on throughout the year. On average the farm makes daily sales of up to 40 tons of rice per day.

Zhong said the company plans to also use the out-grower model where millions of acres of land will be opened up for rice farming across the country.

In Uganda, rice growing is considered strategic as it has the potential to contribute to increasing rural incomes and improving food and nutrition security.

Some of the rice of the country has been exported to regional markets like neighboring Democratic Republic of Congo and Burundi.

Experts say the demand for rice is continuing to grow because of the increasing population.

China through a tripartite agreement with the United Nations Food and Agriculture Organization and some member countries has over the years been sending technical experts to Africa through the South-South Cooperation Program.

Uganda is one of the countries that have benefited from this on-the-farm training of small scale farmers to boost production.

At the end of the second phase of the program in 2017, about 3,000 farmers were trained in cereals, horticulture, aquaculture and livestock in Uganda, according to the ministry of agriculture.

Farmers in eastern Uganda, a region renown for rice growing, have already taken on growing the Chinese hybrid rice to boost their household income.

Uganda also established the 220-million-dollar Kehong China-Uganda Agricultural Industrial Park. The park, according to the Ugandan government, will be critical in transforming the country's economy which is largely dependent on agriculture.

When fully operational, Kehong China-Uganda Agricultural Industrial Park is expected to produce about 600,000 tons of agro-products annually to meet the domestic and regional market demands. Among the agro-products include rice.

Zhong argued that massive investment in rice growing in Uganda will not only boost food security but also create employment.

He said for every youth employed at the Zhong's Industries Ltd rice farm, there are several people who benefit.

Abel Mfitumukiza, a supervisor at the farm said after several years of looking for formal employment with no success, he left his home district Kisoro in southwestern Uganda and sought to work on the rice farm on recommendation of his brother who was already an employee at the farm.

Mfitumukiza said over the years he has managed to build a permanent house for his family back at home. He also uses part of his savings to pay school fees for his siblings who were on the verge of dropping out of school.

According to the managers of Kehong China-Uganda Agricultural Industrial Park, when the park is fully operational, it will create 25,000 jobs and avail opportunities of training for the local people.

Under the country's wetland restoration drive, there is increasing concern from environmentalists over the cultivation of rice in wetlands. The activists argue that the farmers should instead resort to upland rice farming instead of what they called destroying wetlands.

Ministry of water and environment figures show that the country's wetland coverage has reduced to 8 percent from 13 percent of the country's land surface. The reduction is attributed to the population pressure where people are now resorting to wetland reclamation to farm.

Zhong's Industries Ltd rice farm has faced this criticism but Zhong said they got clearance from the country's National Environment Management Authority.

Richard Vvuube, senior environment officer Kalungu district where the farm is located told Xinhua that there is need to strike a balance between protecting the environment and also producing food and creating employment.

"We will advise them on how to protect and conserve the environment and at the same time we are getting the food," Vvuube said.