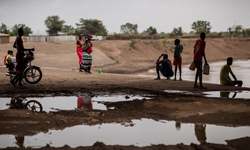 Residents of the town of Kangaten collect water from the Omo River, which has been blocked by the construction of Africa’s tallest dam. (Photo: Charlie Rosser)
Guardian | 13 June 2019