Karuturi Global's new land deal in Ethiopia must be scrapped 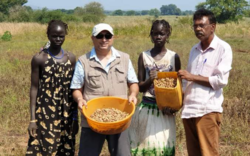 Two years ago, indigenous communities in Gambella, Ethiopia, celebrated the departure of the Indian company Karuturi Global, after its contract for a 300,000 hectares agribusiness project was finally cancelled.1 But a diplomatic intervention by the Indian government and law suits filed by the company appear to have pushed Ethiopian authorities to backtrack and offer a new lease, this time for 15,000 hectares. Once again, the local communities have not been consulted, and a coalition of groups is now urgently calling on the local authorities to put a stop to the process.

On 22 April 2019, Karuturi Global informed its shareholders that it had been "granted 15,000 ha of land for agricultural activities." Annexed to its communiqué was a letter from the Bureau of Agriculture and Natural Resource Development of the Gambella Regional Government instructing the Special Woreda of Etang to revise Karuturi's lease agreement and sign a new agreement for 15,000 hectares. The letter indicates that the decision is a result of the Indian government's diplomatic intervention with Ethiopia's ambassador to India and Karuturi's lawsuit against the Ethiopian government for damages.2


Karuturi was initially granted a 50-year renewable lease in 2009 to produce various food crops on 100,000 hectares in Jikawo District and Itang Special District in the Gambella Region, with an option for expansion to 300,000 hectares. According to the lease contract, Karuturi had to bring 100,000 hectares under cultivation within two years.3 However, by 2014, Karuturi was only producing on 1,200 hectares and operations at the farm had stalled.4 During those initial five years, the Karuturi project displaced local people, caused deforestation and other negative environmental impacts and made no contribution to local or national food security. Given the various tax incentives given to the company, it also provided little, if any, revenue to the country and no decent jobs for locals. In March 2013, 92 Ethiopian workers at Karuturi's Gambella farm filed a complaint with the Department of Labour and Social Welfare claiming that their salaries were delayed and that the company had not provided identity cards, safety equipment, medical treatment or proper residence. The department found workers living in cramped metal shacks without proper ventilation.5


As the Ethiopian government became aware of Karuturi's lack of capacity to farm at such a scale, it reacted by reducing the size of the land allocation. It began with a reduction to 100,000 hectares in 2010 and then to 1,200 hectares in 2015, despite threats by Karuturi that it would sue the Ethiopian authorities through the investor protections afforded under the World Bank’s Multilateral Investment Guarantee Agency or the investor-state dispute provisions of the India-Ethiopia bilateral investment treaty.6


In September 2017, Karuturi announced it would finally be exiting Ethiopia altogether, but demanded compensation, claiming that the government had decided to “unilaterally and illegally cancel our investment and trade license.”7 Then, In November 2017, it was reported that the Indian government was pursuing meetings with the Ethiopian embassy in India to assist Karuturi in negotiating with the Ethiopian government to maintain rights to a portion of its initial Gambella concession.8 A few months later, in April 2018, Karuturi told The Reporter that it was withdrawing its legal case against the government and would be signing a fresh lease for 25,000 hectares.9 The recent letter from the Gambella authorities, annexed to Karuturi's April 2019 circular to shareholders, appears to back up these assertions, although the lease that is referred to is for 15,000 hectares.


Anywaa Survival Organisation (ASO) is in close communication with the communities affected by Karuturi’s agribusiness project in Gambella. These communities continue to oppose the return of Karuturi and the government’s issuance of a new land lease for agribusiness, as it will destroy their natural environment, livelihoods and food systems. There is no evidence that the company has offered guarantees this time around that it will provide social and economic benefits to local communities as part of the new lease agreement.


Karuturi has also been using aggressive tactics to try and salvage its 200 hectare flower farm in Kenya. In 2014, the farm was put into receivership after the company fell so deep into debt that it couldn't pay its suppliers.10 The receiver-managers then tried to sell off the farm's assets, to cover their losses, but Karuturi has doggedly tried to stop them in the courts.11 The legal conflict over the farm itself is still ongoing. Over these years, the farm’s former workers in Naivasha have sunk deeper and deeper into abject poverty, selling their bodies and harvesting water from the extremely polluted lake just to survive.12


Karuturi’s corporate leadership, however, continues to produce a public relations mirage about all this, including towards their shareholders, which include international investors like Citibank North America and Deutsche Bank AG. For example, in their annual report for 2018, the directorsThey repeatedly claim that Karuturi Global Limited is "the world’s largest producer of cut roses" and has "a global presence in Asia, America and Europe". Karuturi is definitely not the world's largest producer of cut roses,even though it is not true, Sher Ethiopia PLC (Afriflora) is.13 And Karuturi has no presence in Europe.14


Despite such egregious misleading information, the company has managed to attract a fresh capital commitment from Phoenix Global, the world's second largest rice trader, based in Dubai.15


Karuturi is one of numerous companies that have grabbed large areas of land in Africa over the past decade and have failed to implement industrial agriculture projects.16 Many of these companies targeted Ethiopia because of the central government’s policy of forcibly removing communities to allocate large swaths of land and providing generous incentives to foreign investors. With a new leadership in power in Addis Ababa, it was hoped that the Ethiopian government would break with this failed policy and turn instead to supporting local food systems and small scale food producers. Karuturi is a critical test case of this new government.


The good news is that the lease agreement has still not been issued by the relevant authorities in Gambella. There is, therefore, still time for the Ethiopian authorities to do the right thing and stop from issuing Karuturi a new lease.


The Indian government should also step back from this process. It must consider the rights of the people of Ethiopia and not pressure Ethiopian authorities into giving up farmlands to Indian companies, especially those with a track record of tax disputes, labour conflicts and complicity in human rights abuses.