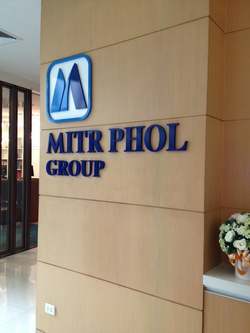 SAMRAONG, Cambodia (Thomson Reuters Foundation) - As a young woman living in Cambodia’s northwest Oddar Meanchey province, Hoy Mai witnessed some of the fiercest fighting and atrocities during the reign of the Khmer Rouge.

Two decades on she is preparing for a different and landmark battle, one against Thai sugar company Mitr Phol that she accuses of violently forcing her family off their land and burning their home to make way for plantations.

The lawsuit against Asia’s largest sugar producer, filed on behalf of about 3,000 people, is the first class-action lawsuit filed in a Thai court by plaintiffs from another country against a Thai company operating outside Thailand.

“It was the first time that we got involved with the police, lawyers and a lawsuit. But we had no other choice,” said Hoy Mai, 56, who was arrested in 2009 for protesting the loss of her land and spent eight months in prison.

“We want compensation so we can rebuild our homes and farm our land. We hope the court will give us justice,” she said, adding they were seeking 4 million baht ($128,000) compensation.

A spokeswoman for Mitr Phol told the Thomson Reuters Foundation she could not comment on an ongoing legal matter.

The company has previously said it invested in Cambodia with government assurances that all land concessions were “processed legally and transparently”. It denied any involvement in human rights violations and withdrew from Cambodia by 2015.

The lawsuit, which was filed in 2018 and begins hearings on June 12 in Bangkok, will be a test case for whether Thai companies can be held accountable for human rights violations in other countries where they operate, according to legal experts.

It is also a reflection of the bitter conflict over land in the region with transboundary investments rising.

Surya Deva at the United Nations Working Group on Business and Human Rights said the onus was on companies to comply with global principles wherever they operate.

“Lack of guidance or a weak local regulatory framework is no excuse. Companies should follow international standards and conduct human rights due diligence to prevent and mitigate adverse human rights impacts,” he said in emailed comments.

“But because of barriers in seeking effective remedies locally against a subsidiary company, victims are often forced to hold the parent company accountable in its home country,” he added, citing examples of parent companies being sued in Canada, Germany and the Netherlands.

Last week, Cambodia’s Ministry of Land Management, Urban Planning and Construction said in a statement that authorities had issued more than 5 million titles and resolved nearly 10,000 land disputes since 2001. About 2,000 disputes are pending.

The impoverished Southeast Asian country has been riven with conflict over land since the Khmer Rouge destroyed the nation’s property records to establish a form of communism in the 1970s.

Such deals, which covered more than a tenth of the country by 2012, have displaced more than 770,000 people since 2000 in a population of 16 million, human rights lawyers estimate.

Following protests, Cambodian Prime Minister Hun Sen announced a moratorium on new concessions in 2012, promised to review old ones, and set up a land titling program that aims to have all land registered by 2021.

But the reviews did not always lead to significant changes, and land was often retained by the government even when concessions were canceled, according to land rights activists.

This has left villagers with few options but to go to court, said Andreas Neef, a professor of development studies at the University of Auckland, who has studied land issues in Cambodia.

“But local courts are regarded as partial and corrupt, so filing lawsuits in Cambodia is not a viable option,” he said.

“Taking foreign companies to court in their own countries or in international courts is a more promising option, as it also puts these human rights abuses in the international limelight.”

Villagers protested to local officials and also filed a complaint with the National Human Rights Commission (NHRC) of Thailand, a government agency, and the European Union.

The NHRC said human rights violations had occurred, and Mitr Phol was responsible. It asked the firm to pay compensation in line with U.N. guiding principles on business and human rights.

Mitr Phol has said publicly that it had received the concessions in compliance with all local and national laws, and after withdrawing from the project in 2014, recommended the government return the land to the communities.

The NHRC has said it has received more than a dozen complaints over the last decade about Thai overseas investments, particularly in Southeast Asia, related to their impact on the environment and people.

In response to NHRC’s recommendations on the Mitr Phol case, the Thai cabinet issued resolutions in 2016 and 2017, asking Thai investors to respect and protect rights of local people, and avoid adverse impacts on the environment and to livelihoods.

But in the case of Mitr Phol, farmers did not get compensation and only about half the affected households got back land they had lost, said Eang Vuthy, executive director of human rights group Equitable Cambodia.

“This is a poor community in a poor country, standing up to a major company in a more developed country,” said Eang Vuthy.

“This lawsuit is a demonstration of how people are standing up for human rights and of how far they must go to get justice.”

But for Smin Tet, a plaintiff from neighboring Taman village, no compensation can fully repair the damage done.

When the families lost their land a decade ago, children were forced to drop out of school and the villagers took on debt as they leased land for farming, took jobs in construction or moved to Thailand for work, he said.

“We had so little before, and we were left with even less,” he said. “It turned our lives upside down. How can we ever be compensated for that?”