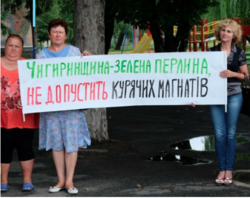 (Read the full report)
On October 13, 2015, Petro Ivanov an investigative journalist and activist in Ladyzhyn city in Ukraine’s Vinnytsya region received an anonymous call from someone claiming they had information to share on local election fraud. When Ivanov went to meet the caller at the designated meeting spot, two men in their
mid-twenties approached him and, without saying a word, punched him with brass knuckles.
On November 25, 2015, Danylo Halych, a local farmer and Chetvertynivka village leader was in his vehicle at the Ladyzhyn city market, when two men knocked on the window and told him he had a flat tire. When he got out of the car to check the tire, the men attacked him, again with brass knuckles, breaking the bones in his face.
A month later, on December 21, 2015, Vasyl Tkachenko, the head of the Yasnozirya village council in the región of Cherkasy was attacked by two unknown assailants inside the local administration building. He suffered brain trauma and severe damage to his face, and was hospitalized for nearly a month. Investigations identified two boxers as the attackers.
The only known and clear common thread among these attacks is that each of the victims were prominent leaders in movements critical of the Ukrainian agribusiness company Myronivsky Hliboproduct PJSC, commonly known as MHP.

MHP is a long-term client of the European Bank for Reconstruction and Development (EBRD), the World Bank Group’s International Finance Corporation (IFC), and the European Investment Bank (EIB). Between 2010 and 2017, the EBRD approved a series of loans investing a total of US$280.75 million in the company. The IFC has invested a total of US$321.25 million in MHP between 2003 and 2014, and in 2014 EIB invested approximately US$116 million.

In 2015 MHP was expanding its industrial poultry business in four regions in Ukraine: Dnipropetrovsk, Vinnytsya, Cherkasy and Kyiv. Communities in those regions were concerned about the impacts of MHP poultry rearing zones and supportive infrastructure on the local environment, public health and water resources. Members of the communities, particularly in Vinnytsya and Cherkasy, felt the company was pressuring local residents, especially the elderly, to lease their lands to MHP. Communities could not get access to information, and MHP inadequately addressed their concerns.