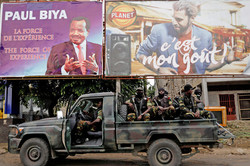 The recent incidents form part of a pattern of threats and intimidation attempts following the publication of an NHCRF report concerning land grabbing and human rights violations in the Northwest region.
Frontline Defenders | 4 June 2019
Cameroon: Elvis Brown Luma Mukuna receives death threats, while his brother is abducted and tortured
On 26 May 2019, human rights defender Elvis Brown Luma Mukuna received a death threat via a call from an unknown number. This is the latest in a series of threats and intimidation attempts that Elvis Brown Luma Mukuna has faced since late 2015 in relation to his human rights work in Bamenda, in the Northwest region of Cameroon. The most recent threats are linked to his work around a report published by the Cameroon National Commission on Human Rights and Freedoms (NCHRF), confirming human rights violations perpetrated by the businessman Baba Danpullo.
Elvis Brown Luma Mukuna is a human rights defender who works as a legal representative for the organisation Organic Farming for Gorillas (OFFGO) and for its founder, human rights defender Jan Cappelle. OFFGO was founded in theNorthwest region in 2015 to work on issues of land and environmental rights, farming, and for the protection of the Cross River gorilla, a critically endangered species that lives in the forests between Cameroon and Nigeria. In the course of their work, OFFGO has monitored the status of land holdings and land grabs in the Northwest, including the alleged land encroachment on small scale farmers’ lands by Baba Danpullo, who operates tea plantations and cattle ranches in Northwest Cameroon.
In 2016, OFFGO’s founder, Jan Cappelle, was expelled from Cameroon to his home country, Belgium, an incident that the National Commission on Human Rights and Freedoms (NCHRF) found was likely due to his human rights work. Furthermore, the NCHRF found that due process was not followed in his expulsion. Since 2016, multiple complaints have been submitted by international and local organisations and individuals to the national government and the NCHRF, calling for investigations into Jan Cappelle’s expulsion, and the ongoing land conflicts between farmers and associates of Baba Danpullo in the Northwest region. Elvis Brown Luma Mukuna has served as OFFGO’s legal representative throughout this period, and has worked to maintain pressure on the NHCRF to investigate complaints and to implement recommendations published in their recent reports, including those concerning Jan Cappelle’s case.
On 16 May 2019, two unidentified men forcibly entered Elvis Brown Luma Mukuna’s house, and abducted his younger brother. They left the house on a motorbike and after a while, stopped in an area in Bamenda known as Up Station, where they blindfolded him. Afterwards, they drove for another 30-40 minutes. The abductors then stopped in an area unknown to Elvis Brown Luma Mukuna’s brother and removed his blindfold. They forced him into a large container where they tortured him for more than two hours by beating him and using hot metal to burn his skin. As a result, he has a broken ankle and wounds on his back and feet.
After the abduction, Elvis Brown Luma Mukuna and his family called his brother multiple times. At one point, one of the abductors picked up the phone and told the family members that Elvis Brown Luma Mukuna needed to drop Jan Cappelle’s case, which is currently in court. Before leaving Elvis Brown Luma Mukuna’s brother in a different area, the kidnappers told him that that this incident was the last warning for the human rights defender. They also revealed that they were monitoring the movements of Elvis Brown Luma Mukuna’s wife and children, and that they were planning tokidnap them. They further threatened to kill him if he reported the incident to the authorities.
The recent incidents form part of a pattern of threats and intimidation attempts against Elvis Brown Luma Mukuna and OFFGO members which has started in 2015 and has recently escalated, following the publication of the NHCRF reportconfirming OFFGO’s findings concerning land grabbing and human rights violations in the Northwest region. Theseincidents come in a context of harassment and threats committed against human rights defenders in western Cameroon in reprisal for their work on land, environmental, and indigenous peoples’ rights.
Front Line Defenders is deeply concerned about the death threats received by Elvis Brown Luma Mukuna and the recent abduction and torture of his brother, as it believes that they are solely motivated by his legitimate activities in defence of human rights. Front Line Defenders recognises these threats as part of an effort to clamp down on human rights defenders working for land and environmental rights in Northwest Cameroon.
Front Line Defenders urges the authorities in Cameroon to:
Original source: Frontline Defenders
TWITTER
FACEBOOK
WHATSAPP
PRINT
E-MAIL
TWITTER
FACEBOOK
WHATSAPP
E-MAIL