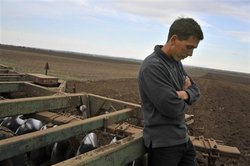 
Hungary can't curb farm sales to EU foreigners, top court says
By Stephanie Bodoni
Hungarian restrictions on farmland investors from other European Union nations violate basic rights enshrined in EU law, the bloc’s top court said.
“Hungary has failed to fulfill its obligations” under the bloc’s rules, the EU Court of Justice ruled in Luxembourg on Tuesday. The judgment cannot be appealed.
The European Commission in 2017 sued Hungary, arguing that the nation had adopted rules that unlawfully restricted the rights of foreign investors in agricultural land, and deprived them of the value of their investment. The case goes back to 2014, when the commission sent Hungary a letter of formal notice, followed a year later by a reasoned opinion asking Hungary to bring its rules into line with EU law.
The Hungarian law “terminated so-called ‘usufruct rights’ -- contracts giving the right to use a property and to profit from it -- held by investors in Hungary,” the EU authority said in 2016, when it decided to sue the country. According to the commission, the original contracts were subject to a 20-year transitional period, meaning that the contracts were expected to end on Jan. 1, 2033. The new law cut this period, meaning the investors’ contracts were terminated on May 1, 2014, without compensation.
“The deprivation of property” under the contested Hungarian rules “cannot be justified on the ground that it is in the public interest,” the court said. “Nor are any arrangements in place whereby fair compensation is paid in good time.”