How Egypt’s water feeds the Gulf

How Egypt’s water feeds the Gulf
By Nada Arafat and Saker El Nour
Vast expanses of green extend across the horizon, tended by the advanced machinery that has replaced hundreds of agricultural workers. The land is watered using center-pivot irrigation systems, connected to one another in a series of canals through which water is driven by one of the biggest water pump stations in the world. A number of engineers oversee the expansion works to cultivate new fields of alfalfa on land run by one of several Gulf investment companies in the Toshka project.
This is Egypt’s Western Desert, an area where rapid changes are in full swing to make green what was mostly sandy desert two decades ago.
The desert’s greening is part of an agricultural development and investment initiative framed as aid to the Egyptian people. But in fact, Gulf corporations acquired most of the land as part of the oil-rich countries’ plan to ensure their food security by cultivating land outside their borders.
The scene today is the culmination of the moment when Gulf countries realized the importance of preserving their already scarce water resources. In January 2009, the Kingdom of Saudi Arabia launched the King Abdullah bin Abdulaziz initiative for agricultural investment abroad, outlining plans to achieve food security by investing in countries with agricultural potential.
This initiative included offering financial support to Saudi investors, with the government covering up to 60 percent of construction and production costs. The government also committed to negotiating bilateral agreements with other governments to facilitate business for investors abroad and secure the export of at least 50 percent of their produce to the kingdom. 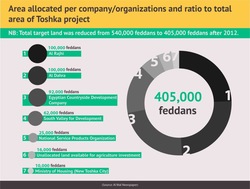 This long-term agricultural strategy evolved with one ministerial decision after the other, starting from limiting wheat cultivation in 2005. A 30-year program of wheat production and cultivation in the kingdom then decreased gradually until it was completely halted in 2008 due to concern over the depletion of water resources. Last year, while the Saudi government lifted the ban on wheat farming under certain conditions, the cultivation of green feed was completely banned as it consumes up to six times more water than wheat.
Saudi Arabia wasn’t the only Gulf country with an impending water crisis. The United Arab Emirates was also facing diminishing water resources and turned to importing about 90 percent of its food. The UAE thus also began to push for investment in farming ventures abroad.
Facing similar challenges, the two countries jointly announced “The Strategy Of Resolve” last year to strengthen economic, political and military cooperation. This includes establishing a unified strategy for food security, with plans to harness the full potential of agricultural and livestock production and to work together on joint projects.
In the last few years alone, the Emirates has managed to gain control over almost 4.25 million feddans of land spread out over 60 countries, while Saudi Arabia now controls about 4 million feddans around the globe.
Some define the rush by richer countries to buy or lease large expanses of land in countries with agricultural potential as a form of neocolonialism, which achieves food security for the investing countries while exploiting non-renewable resources, including water, in the farming countries.
Gulf investors found their panacea in Egypt, which is increasingly adopting a capitalist agricultural production model that prioritizes investment in large-scale, modernized farming to export crops over pursuing strategic crop cultivation and traditional farming methods in the Nile Valley and Delta.
“Come along with me
around Egypt to see
what has become of our country,
a different picture than two years ago, or three.
Between two reigns, I do not compare, or despair, or shout in glee.
It’s my children’s right to see
Egypt, my country,
in the millennium, shining new as can be.”
So went the anthem played on all state-run Egyptian TV channels in early 1997 during the visit of former President Hosni Mubarak to Egypt’s Western Desert, just 225 kilometers south of Aswan. In what became an iconic photograph of the Mubarak era, he can be seen raising his hands in salute to the engineers to inaugurate the Toshka project.
The project’s plan was designed to start construction in 1997 through to 2017.* The main objectives were to erect a new Delta south of the Western Desert, add up to 1 million feddans of farmland, create new industrial and residential communities, and generate 45,000 new jobs every year to accommodate 4-6 million Egyptians in 10 years.
*Source: Sims, David E. Egypt’s Desert Dreams: Development or Disaster? Cairo: American University in Cairo Press, 2018.
But years have gone by, and Egypt has not noticeably benefited from the Toshka project. The crisis of overpopulation in the Nile Valley and the issue of food security remain unresolved. The project has, however, achieved considerable success for some foreign investment companies.
The Emirates gained a foothold in the project as early as 1997, with a $100 million donation made through the Abu Dhabi Fund for Development. The money went toward constructing and lining the project’s main water canal. Extending for about 51 kilometers, it has since been renamed the “Sheikh Zayed Canal” after the ruler of Abu Dhabi.
The concerned authorities earmarked one-tenth of Egypt’s total quota from the Nile’s water (5.5 billion cubic feet out of 55.5 billion cubic feet) for the project. A 250 MW pumping station was built to pull the water from Toshka valley, which is linked to Lake Nasser and filled from flood water, to the Sheikh Zayed Canal, which then feeds four branches extending along the areas to be “reclaimed.”
In 2003, water was pumped into this canal for the first time, bringing with it an influx of Gulf investors into the Toshka area. The project currently spans about 405,000 feddans, 100,000 of which are owned by the Saudi-based Al Rajhi International for Investment company and another 100,000 owned by the Emirates-based Al Dahra for Agricultural Development company.
Egypt also owns shares in the project: 25,000 feddans are currently under the administration of the Egyptian National Service Products Organization, which bought the land from Al-Waleed bin Talal’s KADCO [Kingdom Agricultural Development Company] in 2017. Another 62,000 feddans are under the South Valley for Development and 92,000 feddans have recently been allocated to the Egyptian Countryside Development Company — both of which are state-owned agricultural reclamation companies. Ten thousand feddans of land were also allocated to the Ministry of Housing to create New Toshka City, while 16,000 feddans are yet to be allocated.
The two Gulf-owned companies, Al Rajhi and Al Dahra, thus control about 49.4 percent of the total land developed under the project. 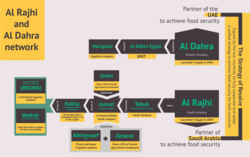 The Gulf investment companies acquired the land in Toshka through a land deal, whereby the company acquired ownership of the land in phases. The number of feddans to be reclaimed in each phase is agreed upon, and, after the completion of each phase, the land ownership is transferred to the company until the company eventually owns the entire allocated plot.
A report published by the Central Auditing Authority in 2014 states that the land was sold for just LE50 (US$3) per feddan, while the projected market price at that time was estimated at LE11,000 (US$635) per feddan. The Egyptian government footed the bill to develop all of the infrastructure of the canal system, while the investors covered the costs of agricultural reclamation and completing the construction of branches from the irrigation canal, drainage systems and water pumping stations on the land they had acquired.
A complex investment network
The Gulf’s network of agricultural investment in Egypt is quite intertwined, as the business interests of private investors from both Egypt and the Gulf intersect with the broader political and economic ties between Egypt and the Gulf countries.
Al Rajhi Investment Group is a Saudi-based corporation owned by the Al Rajhi family. It was founded by Sulaiman al-Rajhi and is one of the main partners in King Abdullah’s foreign investment initiative. It entered the Egyptian market in 2009.
Currently, Al Rajhi owns Tabuk Agriculture Development Company. which is, in turn, a partner in the Saudi Arabian conglomerate Jannat Agricultural Investment Company. Six other Saudi-based companies working in agricultural investment fall under the purview of Jannat, including Al Kharif for pivot irrigation systems and Almarai.
The Saudi Jannat Agricultural Investment Company owns about 78 percent of shares in the Egyptian company Rakha for Agricultural Investment, which owns the Egyptian government entity REGWA, an irrigation systems company that has been accused of corruption and land grabbing in multiple lawsuits.
Rakha for Agricultural Investment is also affiliated with Wafrah for Industry and Development , a Saudi-based company that works in food production.
Al Dahra is an Emirati corporation specializing in agriculture, as well as the production and supply of animal feed to the Food Security Authority of the UAE. It is also owned by royal family member Hamdan bin Zayed Al Nahyan, the ruler’s representative of Abu Dhabi’s Western Region, making the corporation heavily involved in the government’s plan to implement the Emirates Strategic Food Security Program.
The company began operating in Egypt in 2006, establishing Al Dahra Egypt in 2007. It cooperated with the Egyptian and Emirati governments through its acquisition of the Egyptian company Navigator for Agricultural Investment. 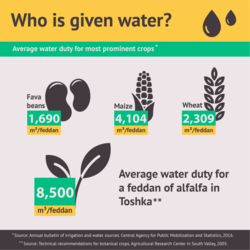