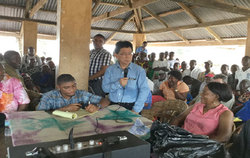 
By Alhaji Manika Kamara
The Sierra Tropical Investment Company have been given the green light to operate pine apple cultivation, processing and exporting by the House of Parliament on Tuesday 30th April 2019.

It could be recalled in 2018 during his statement at the official State opening of Parliament, President Bio maintained government will improve the seed bank system to attract reliable private sector players, support the private sector for large scale agricultural production, processing and marketing and support local industries engaged in the fabrication of farm tools and supply for other farm inputs among others.

The Minister of Agriculture, Joseph Ndanema on Tuesday 30 April 2019, laid the Agreement between the Government of Sierra Leone and Sierra Tropical Limited relating to Bo District agro-processing facility project, in Parliament. The agreement relates to the establishment and operations of the agro-processing facility dealing with the cultivation, processing and export of fresh and or processed pineapples in Nugbu Chiefdom Bo district.

According to him the project will include a fruit farm of pine-apples and agro-processing facilities where fruits are grown in the country particularly pine-apple with the hope of moving into mango, guavas and other tropical fruits in the not too distant time for processing and possible export to the international market.

He disclosed that the investment would include a minimum of 4,335 hectares of land to house the farm and other infrastructures including a modern agro-processing facility. He added that the local people and environs of Nugbu chiefdom will be the greatest beneficiaries.

The Minister disclosed the operations of Sierra Tropical would not only address the issue of unemployment with more than 90 percent of its staff as locals within the District but also the challenges of rural-urban migration.

“Currently Sierra Tropical employs about 450 local staff which is expected to rise to between 1,000 and 1,500 by mid 2019 and between 1,500 to 2,500 on or before the end of 2020,” he assured, explaining the Company intends to increase the monies for lease agreement within the shortest possible time.

He maintained they have already paid lease to title holders as well as compensation to crop owners within their area of operation, assuring the Company have developed and approved a community action development plan as part of its corporate social responsibility with a budget of $300,000.

According to the MP of the host community for the Company, Constituency 078 in Bo district, Hon Alimamy O. Kamara, the Sierra Tropical investment is a pilot project in Sierra Leone and Africa in general outside Malaysia and other countries where the project is being operated.

He maintained that the response from the community people towards the project is so positive that they were thinking the approval of the agreement has been long overdue.

“Unlike other investment projects that only deals with exporting of the raw materials, Sierra Tropical Investment Company will not only cultivate and process but also export the finish products,” he assured, explaining that it will ultimately generate more revenue for the country.

The Deputy Chairman of the Committee on Agriculture, Hon Aaron Aruna Koroma (APC), Constituency 048, Tonkolili district, disclosed the project started in 2016 but there were things that were left undone which was why the document was not taken to Parliament.

He disclosed the Company will only access tax waivers offered by the Finance Ministry after the successful approval of their project in Parliament, pleading with the Agriculture Ministry to ensure the Company create buffer zone to avoid the Sahr Malen issue faced by Socfin.

He maintained the local farmers should have a piece of land for the agricultural purposes to their daily sustenance and livelihood to ensure peaceful coexistence between the people and company.