China's investment in foreign agricultural projects is booming, according to statistics peddled by Chinese agricultural officials during last weekend's "Belt and Road" summit held in Beijing.

China Central TV reported that China has 850 foreign agricultural-related projects in commodities such as rice, corn, soybeans, natural rubber, palm oil, cotton and livestock that reflect "deepening cooperation" with "Belt and Road" countries. According to Ma Hongtao, director of the Ministry of Agriculture and Rural Affairs Foreign Cooperation Office, China has 657 agricultural projects in Belt and Road countries valued at $9.4 billion, up 70 percent from five years earlier. 89 percent of investments are carried out by private entities, the official said.

Ms. Ma explained that investments had evolved from an early focus on crop production to a broader collection of processing, transportation, storage, and ambitions to pull along industry development  and create employment in the target countries. She said over 400 "senior agricultural experts" had been dispatched to developing countries for training and demonstration since 2014.

Official Chinese statistics show that agriculture, forestry, and fishing investment abroad has been slowing. Annual outbound investment flows rose rapidly from $500 million in 2010 to a peak of $3.3 billion in 2016. In 2017 outbound ag investment slowed to $2.2 billion and it slowed again to $1.8 billion in 2018. This reflects a general slowdown in outbound investment as authorities put the clamps on outflows of cash. These statistics don't include major investments in processing such as the purchase of Smithfield Foods (which is actually owned by a holding company listed in Hong Kong) or COFCO's purchases of agricultural trading companies. 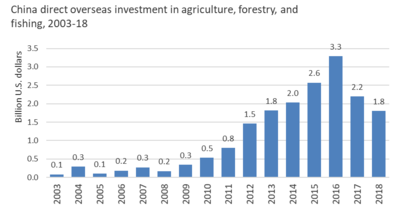 Vice Minister of Agriculture and Rural Affairs Qu Dongwu promised major efforts in multilateral and "south-south" cooperation with countries on the Belt and Road. Agricultural officials from Argentina, Pakistan, Mozambique, and Tajikistan recited their ambitions to expand agricultural trade and cooperation with China.

Another article in State media highlighted efforts to develop new points of entry to create a "green channel" for agricultural products from Central Asian countries. A complex of farms on China's Alashankou border crossing will quarantine thousands of live animals imported from Kazakstan. The first phase of the 660-million-yuan project built by CITIC Construction Ltd Co (a subsidiary of a State-owned investment company) will be able to hold 100,000 cattle, 30,000 sheep, and 12,000 donkeys and horses after its planned opening in October 2019. A second phase will expand capacity next year. China has been upgrading border crossings from Kazakhstan, Kyrgyzstan, and Tajikistan and streamlining of customs clearance processes since 2015, the article said. China's Xinjiang region now has 4 designated entry points for grain, 3 for fruit, 2 for fish and shellfish products, and 1 for planting material; 7 meat entry points and 1 for fruit have been approved. The article highlights horses for slaughter, sheep meat, aquaproducts, wheat, wheat bran, and soybeans from Kazakhstan; fish products, mangoes, tangerines from Pakistan; cherries and mung beans from Uzbekistan; cherries from Tajikistan; breeding horses and cherries from Kyrgyzstan; Belarus poultry; Mongolian frozen horse meat; and plants used for Chinese traditional medicine.

Earlier this month, 600 metric tons of Kazakh wheat arrived with much fanfare at a free trade zone in Lanzhou, Gansu province, built to process imports from Central Asia. The wheat was trucked from Kazakhstan to the Lanzhou zone where it cleared customs. A pharmaceutical company in the Lanzhou zone called Haixiang Biotech Ltd Co will sell the wheat to be used as animal feed in Chongqing and Chengdu. The shipment is said to be a demonstration of plans for expanded trade in grain and oils with Central Asia. One rationale for boosting the trade is to utilize empty shipping containers returning to China from Europe. The Assistant manager of the company operating the free trade zone told State media that the zone will work hard to attract companies through tax rebates, land lease fees, and electricity rates.