What to watch: Karuturi - Will new land deal prove fertile? 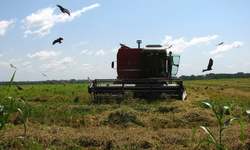 (Note: Karuturi's announcement to the Bombay Stock Exchange with information on the new land lease can be downloaded here)
What to watch: Karuturi - Will new land deal prove fertile?
Shares of Karuturi Global may remain in action, as its subsidiary Karuturi Agro Products Plc, Ethiopia, has been granted 15,000 hectares for agricultural activities. Earlier, Karuturi Agro had signed an agreement for 100,000 hectares in the country but could not make investment due to “various reasons” and the company had moved a court for compensation. However, due to diplomatic efforts, Karuturi has now been granted 15,000 ha of land. Shareholders will watch further development.