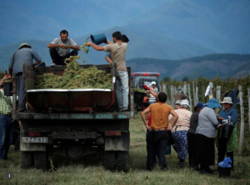 Georgia's ban on foreign landowners leaves farmers in limbo
By Umberto Bacchi
TBILISI, April 17 (Thomson Reuters Foundation) - When Georgian businesswoman Tamar Gerliani planted grapes on a small piece of land to start her own winery three years ago, she knew she faced an uphill battle in an industry dominated by men.
But she could not have foreseen that a legal reform designed to help Georgian landowners would make things even harder.
A ban on foreigners owning farmland introduced last year in Georgia's new constitution has made it more difficult for farmers to borrow because the country's mostly foreign-owned banks will no longer accept it as collateral.
That has thwarted hundreds of small farmers looking to expand, banking associations, farmers and pressure groups say - among them Gerliani, who needs $10,000 for a tractor to tend her vines.
"It's difficult to work without a tractor," the 31-year-old told the Thomson Reuters Foundation.
"This business already has many challenges and I could do without having to go ask around every time I need to use it."
The new constitution states that, with a small number of exceptions, agricultural land can only be owned by the state, a Georgian citizen or a Georgian-owned entity.
The provision came into force in December last year as the former Soviet republic swore in a new president - though there has been a de-facto ban on foreigners buying farmland since 2017, when the government imposed a moratorium on purchases.
It followed widespread public concern about outsiders scooping up too much of the country's fertile soil, particularly in strategically sensitive areas, said Agriculture Minister Levan Davitashvili.
About 40 percent of Georgia's population live in rural areas, but less than 10 percent of the country's land is arable - and foreigners own about 10 percent of it, he said.
"Most of our agricultural land is pastures located in high mountainous areas," Davitashvili told the Thomson Reuters Foundation by phone.
"People were a bit concerned and this ... was reflected in the constitution."
But the ban is damaging small farmers, who often have no other collateral, said Teona Zakarashvili, a lawyer at anti-corruption watchdog Transparency International.
"This type of regulation has a bad effect on common people. It directly impacts the livelihood of small farmers who already are in a very poor financial state," she said.
Since the moratorium came into force, about 1,500 loans were denied loans of it, according to the parliamentary committee on agrarian issues.
Women in particularly have been badly affected. They often have no other property because sons are traditionally favoured when it comes to inheritance, said Nino Zambakhidze, who heads the Georgian Farmers Association.
A worker carries buckets of grapes for wine during harvest in the village of Lomistsikhe, in Kakheti region, Georgia, September 28, 2016. REUTERS/David Mdzinarishvil
LOVING WINE
Gerliani's grandfather left her one hectare (2.5 acres) of land in Kakheti - the main wine-producing region of a country widely regarded as the birthplace of winemaking.
Her family, like many others in the area, had been producing small quantities of wine for generations, but as she grew up she began dreaming of turning it into a business.
After studying marketing online, she took up winemaking classes and used her spare time to work on her dream - a wine label called Malati, the word for love in the Svan language spoken in Georgia's mountains.
She invested savings and planted Saperavi - the grapes used to make Georgia's best known wine, a full-bodied red.
Georgian wines went into decline under the Soviet Union, when many wineries fell under state control.
But it is now enjoying a resurgence - last year, the country exported a record 86 million bottles, according to the Georgian National Wine Agency.
After a few years of hard work Gerliani is expecting to produce up to 3,000 bottles of organic wine with her next harvest in autumn.
But the journey was not an easy one.
At first, she said, almost no one took her seriously.
"It's not easy to start as a woman," she said. "Men think they are more professional and know much more about this business than women do".
Most people assumed she had no idea what she was up to, and whenever she needed equipment or workers she found herself quizzed over her winemaking credentials.
That was one of the reasons she was so keen to buy her own tractor. But with only her vineyard as collateral, she has been unable to do so.
SOLUTIONS
Davitashvili, the agriculture minister, said the government was aware of the problems faced by small farmers like Gerliani and was looking as possible solutions.
They include allowing financial institutions to own agricultural land for up to two years, after which they must sell it.
A draft law would also allow foreigners to own land if they inherit it or have an investment plan approved by the government. Those failing to use it for agriculture however would be forced to sell it.
Davitashvili said he hoped the law would be approved before the beginning of the summer.
Meanwhile, tractor or no tractor, Gerliani is determined to make it.
"It's really hard but I manage," she said. "I am doing my best."
(Reporting by Umberto Bacchi @UmbertoBacchi, Editing by Claire Cozens. Please credit the Thomson Reuters Foundation, the charitable arm of Thomson Reuters, that covers humanitarian news, women's and LGBT+ rights, human trafficking, property rights, and climate change. Visit http://news.trust.org)