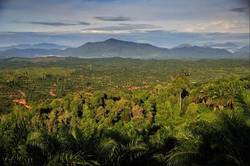 Palm oil plantation in Sabah, Malaysia. Photo: RSPO/Jonathan Perugia
The Roundtable for Sustainable Palm Oil (RSPO) is working to bring sustainable palm oil into the “mainstream”. And while notable progress has been made – in terms of both awareness and uptake of the certification scheme – RSPO CEO Datuk Darrel Webber says that the food sector needs to “get its hands dirty” and not shy away from two key challenges on the horizon: winning over smallholders and African producers.

With around 66 million tonnes produced annually, palm oil is the most common vegetable oil in the world. It is used in around half of all supermarket products, from pizzas to baked goods and spreads.

Palm oil plantations currently cover more than 27 million hectares of land globally. And, while it is a highly efficient crop, palm has faced a significant consumer pushback because of its associations with deforestation, habitat destruction and biodiversity loss.

The RSPO aims to advance the production, procurement, finance and use of sustainable palm oil products. This can be achieved through the development, implementation and verification of “credible global standards” down the palm oil supply chain, the certification body believes.
“We are not apologists for palm oil. We only talk about sustainable palm oil. I wake up every day thinking about how to be sustainable,” ​Webber told FoodNavigator.

Palm oil is a popular ingredient in food thanks to its functional properties. It is stable both at high cooking temperatures and over time. It has a neutral taste and smell, and a smooth creamy texture. It also contains less than 1% trans fats, making it a viable replacement for partially-hydrogenated fat that is high in trans fatty acids.

According to the sustainability expert, who joined RSPO from WWF International, said despite its bad reputation, palm oil is actually leading the way in tackling issues around sustainability head on.
“As much as palm is demonised, it is by far and away the only commodity that is handling its issues in a systematic way.​

“There is no other commodity on the planet that has a programme like ours. Unfortunately, it is hard to grab the attention of the masses on issues like soy or beef, which are much higher up the deforestation baddies list. It is understandable because there is not a charismatic species [like the orangutan] linked to soy or beef.”​

Rather than moving away from the use of palm oil to other vegetable-based oils – such as rapeseed or sunflower oil – Webber calls for the food sector to support the uptake of sustainable practices in palm oil producing countries.

Indeed, he observed, large food companies have ramped up their focus on delivering zero deforestation in their palm oil supply chains. However, sometimes in the rush to produce products that can make sustainability claims, there is a risk that parts of the industry will be left out in the cold.
A recent report from WWF Poland highlighted that palm oil is the most efficient vegetable oil, producing more than double the amount of oil per hectare as its closest rival, rapeseed.

"Complete replacement of palm oil... would be connected to unfavourable changes regarding land use, but also to increased carbon dioxide emissions,"​ the report concluded.
“Companies are acting. A lot of the actions probably come from a good place. But sometimes I think it is ill-informed. We have picked the low hanging fruit, the big companies. Now it is the long tail we have to worry about,”​ Webber explained.

Currently, smallholders produce around 40% of all palm oil. Webber warned bringing small-scale producers into the RSPO will be crucial to raising industry standards because “they can also do the most harm​”.

To date, the RSPO has certified more than 100,000 smallholders as conforming to its standards for environmental and social production.

There is a risk, however, that the industry drive for segregated sustainable supply could lock smallholders out of the certification system, Webber noted. “They don’t enter into the physical oil chain. They can’t supply oil because they don’t have mills. There is a big push [from food makers] to get segregated fully traceable supplies – but that is hard for smallholders.​

“They can get certified but then after that they have issues of how to sell their stuff. That is going to be a big issue – how to get smallholders rewarded for being sustainable.”​

Sustainable palm oil credits can be part of the solution. “If you buy one credit it means one tonne of oil is certified to be produced somewhere on the planet. It is connected it is just not fully traced down the line.”​

The RSPO has also agreed a “bottom up”​ smallholder standard that delivers a “step-wise approach”​ to get smallholders on board and then raise standards over time. “Will the market respond favourably to this? I don’t know. In my opinion the market can do much more for smallholders,”​ Webber suggested.

“The market has got to be patient. I have no doubt some detractors will say it is not good enough – but that is the story. RSPO are not in the business of making certified palm oil a niche product. We are in the business of mainstreaming it, so we need to bring everybody along. For smallholders, we have to bring them to this step-wise approach.”​

The next frontier: Africa

Webber revealed that an emerging stress-point for the future development of sustainable palm oil is growing production – and demand - in Africa.

“My big concern, my real worry, is in the least developed countries there is no alternative development path that is as enticing as palm oil. Based on our new standards – zero deforestation – how do we help these high forest carbonations develop palm oil in a responsible way? How do we solve this?”​

Webber said that the purchase-power of food makers serving markets where demand for sustainable palm oil is high is unlikely to provide enough economic incentive to promote sustainable practices when growing demand for palm oil from within Africa will be enough to sustain the industry in the future.

“Africa has many of these least developed countries. They don’t need to export – they need to just consume. If you tell them no deforestation, they will still develop a palm oil industry.​

“It is in our interest to get in there and say ‘these are the constraints’. It is going to be difficult and very sensitive – but walking away from this issue will do more harm than good.”​ Webber believes food makers need to “get their hands dirty”​ and work closely with these upstream producers who do not operate to RSPO standards. Currently, he suggested, the alternative is much worse.

“What is waiting for them is the charcoal industry. It has low entry barriers. They burn down forests. They leave a trail of destruction. They pay a pittance but it’s a welcome pittance. That is their alternative development path at the moment.​

“We can’t walk away from this. As much as you would like to keep your hands clean. You have to be there to give an alternative path for development. Otherwise you are leaving them to Ebola or some other disease that they don’t have money to fight.”​

Webber said progress is being made on the continent, pointing to the Marrakesh Declaration that has seen nine African countries commit to sustainable palm oil. Nevertheless, “it’s slow going”.​

Bringing people to the table

The RSPO wants to “raise all ships in the harbour​” by bringing as many people into the conversation as possible.

The organisation is currently trialling a “jurisdictional​” approach, where an entire region can gain certification for sustainable palm oil – rather than individual landholdings. This approach requires the support of growers, business, civil society and government – and Webber is hopeful that it will help deliver a broad-based boost to standards.

“These jurisdictions say ‘everything we produce from these regions will be 100% certified’. This helps to really ramp up our impact,”​ he explained. “We also want to use a jurisdiction approach to bring in governments to try and solve the smallholder issue, to try and institutionalise sustainable production. That is something for the future. If this works, we will move from certified management units to jurisdictions.”​

Bringing more elements of the supply chain into the fold is vital if sustainable palm oil is to become the norm. However, Webber expressed some frustration that those who are already working to uphold RSPO standards face a far greater degree of scrutiny – and criticism – than those who remain outside the system.

“There is a role for NGO campaigning. But let’s understand we need to bring everyone on board. We need to engage with these less developed countries and smaller companies that are not RSPO. You can improve the front runners [by delisting suppliers who miss RSPO standards] but how much more good to the planet is it going to do?”​

The big players, who already engage in RSPO, are more likely to act responsibly because they have “reputations to protect​”.

“The CEO of a company does not wake up thinking ‘how can I abuse workers?’… The smaller growers do wake up thinking how to screw over a worker. These are the faceless suppliers with no name. They want profits… The big guys have reputation to protect. The smaller guys have no reputation to protect. Those are the ones I am worried about. The ones not at the table.
“Everybody is attacking the best performers, not those who aren’t at the table.”