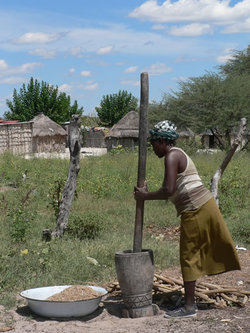 Corruption in the land sector (and land administration in particular) hinders women's access to land ownership, and affects their use of and control over the land. This prevents women from benefiting from economic opportunities brought by the security of tenure.
Corrupt practices in the context of large-scale land-based investments in Africa contribute to the unauthorised conversion of customary land to commercial land. This usually happens to the detriment of poor rural women's access and land use rights because commercialisation concentrates land in the hands of those who can assert ownership, usually community leaders, male household heads and the elites.
In Namibia, for instance, the government some years ago had through various ministries received proposals from multinational agribusinesses to develop large-scale agricultural irrigation projects "along" the Kavango and Zambezi rivers in the Kavango East and Zambezi regions, respectively. In most cases, proper procedures of land acquisition were not followed, and as a result, some of these projects did not materialise because they were heavily opposed while others were delayed (Thiem & Muduva, 2015). During this process, women were the most affected as their access to the land for cultivation and to obtain "forest products", including food, was restricted.
Despite multi-dimensional efforts at various levels and the crucial contribution of women to agricultural production, women's access to and control over land in Africa remains minimal. Women comprise around 43% of the agricultural labour force (with variations across countries and regions), but they consistently own less agricultural land than men (Zúñiga, 2018).
In sub-Saharan Africa alone, women contribute more than 60% of the labour used to produce food for both household consumption and sale. In general, the land held by women tends to be smaller and of lower quality soil than that held by men.
Studies show that the female individual land ownership in Uganda was 14% in 2011, whereas male individual land ownership accounted for 46%. In Senegal, only 5% of women individually owned land, compared to 22% of men in 2010-11 (Zúñiga, 2018).
The lack of land ownership puts women in a situation of vulnerability because decisions over land are made predominantly by men. Moreover, women in many cases are excluded from farming business opportunities because of this lack of statutory rights over land, which limits secure access to productive resources to guarantee consistent supply of produce.
Although land reforms and laws in some countries recognise women's equal rights of ownership, informal social norms and local practices often exclude women from land ownership. Land corruption tends to reinforce this tendency by following some regressive customary norms and practices, rather than progressive modern laws on land. In general, customary laws link women's land rights to their relationship with men, which are often deep-rooted in patriarchal logics and narratives such as male inheritance preference, and a lack of recognition of women's contribution to family well-being and national development. Frequently, family lands are registered under the son's and male relative's names, while widows and daughters are left out when it comes to land inheritance.
In some African cultures, the widow is still expected to marry a brother or close relative of her deceased husband to maintain or preserve her access to land. However, widows are often thrown out of their homes, are disowned, or are victims of violence by the relatives of the deceased. In Namibia, some of these incidents seem to have declined since the enactment of the Communal Land Reform Act 5 of 2002, which guarantees the protection of women's land rights.
Beyond customs, there are also other factors which sustain land gender discrimination. In cities, the impact of urban land corruption on women is closely related to the conditions of poverty and discrimination in which many women live. A survey in low-income urban communities in Ghana, Senegal, Tanzania, Uganda, Zambia, Sri Lanka, Colombia and Costa Rica shows that just one-third of owner-occupiers were female.
Other studies have also revealed that women renters may be discriminated against by the stigma of HIV-AIDS, and single women because of the absence of male "guardians", as in southern India (Zúñiga, 2018). In addition, women's limited access to stable employment and earnings is a frequent explanation of the gender inequality in accessing housing due to the lack of collateral to get mortgages or loans. As a result, legal housing becomes unaffordable, which pushes them to illegal housing cooperatives and shacks that are often characterised by high risk and corruption.
Discrimination against women also takes place when it comes to bribery in land administration. Women are especially vulnerable to pressure to pay bribes, and are often subjected to sexual harassment, violence and extortion. Women also have difficulties in receiving compensation in land acquisition. Certain actions regarding investments in land require compensation to the displaced original inhabitants of those lands in question, but the payments are often gender-insensitive. In Ghana, for example, the payment of compensation by the state for the acquisition of land for the Tamale Airport reinforced existing cultural- motivated gender biases and unequal power relations, tending to offer protection to the more powerful of society at the expense of those who are vulnerable, including women (Transparency International, 2018).
In conclusion, women's right to property includes the right to acquire and dispose of any movable or immovable property obtained by their own labour or through inheritance.
Therefore, their right to property is a broad notion that has a bearing on several legislative frameworks, including marriage and inheritance laws (FAO, 1995).
The African land policy conference, which will focus on corruption in the land sector, is scheduled for 4 to 8 November 2019 in Abidjan, Cote d'Ivoire, and is expected to deliberate on this subject.
- Theodor Muduva is an adviser for academic cooperation - land governance in Southern Africa (GIZ-AU Office). He is seconded to the department of land and property sciences (DLPS) at the Namibian University of Science and Technology (Nust). He writes in his personal capacity.