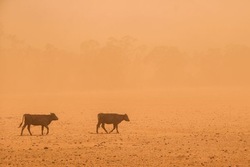 "At the moment, there's a small percentage of water owned by foreign interests and much of that is by one property — Cubbie Station," Mr Littleproud said.
However, the Conservative Party's South Australian Senate candidate Rikki Lambert said it was a major concern to see China as one of the major investors in Australian water entitlements.
"Chinese foreign ownership is different to other forms [like British foreign ownership] because it is state-based," Mr Lambert said.
"The Chinese Government has effective control of any [Chinese] company that operates around the world."
"There is a clear connectivity between their governments and the ownership of that water and that's very concerning.
"It's strategic because these countries are wanting to shore up their own food security and growing food in another country so they're not using their own water resources at home."
Chief executive of the National Irrigators Council Steve Whan said he was not concerned about the report's findings.
"In the water space, if you are going to have an open market, you've got to accept that some level of ownership is going to be foreign," Mr Whan said.
"We've got no particular domination by any country or company, which is reflected in that."
"We need to remember that having water entitlements is only valuable for you if it is actually used for [a] productive purpose."
Irrigators concerned
But South Australian winegrape grower Jack Papageorgiou has concerns that the agreement surrounding Australian water entitlements is not mutual between locals trying to make a living and international investors trying to make a profit.
"No other country that I know, allows us, as an Australian citizen, to go and buy and purchase their water entitlements," Mr Papageorgiou said.
"For someone like me and my fellow growers in all commodities, we have permanent plantings and we've got to have security of our permanent plantings otherwise we are putting our livelihood at risk. We can't accept that."
Mr Rooney has acknowledged there is the potential for an uneven playing field.
Rural news in your inbox?
Subscribe for the national headlines of the day.
"One of the concerns that we are getting from our customers is that: how big is that market? Can it be gamed by international investors? And are they operating on an equal playing field when it comes to access to money?" he said.
University of Queensland Professor of Economics John Quiggin agreed that there was a disparity in opportunities on the water market.
"Foreign corporations have rights under our free-trade agreements that aren't available to Australians," Professor Quiggin said.
But AgForce Queensland farmers CEO Michael Guerin believed the right policies and laws were in place to protect local producers and said investment in the industry should always be welcome.
"Capital, whether it be foreign or local, creates those jobs and creates that economic activity," Mr Guerin said.
The bigger picture
Professor Quiggin dismissed the government report as a major cause for concern and instead encouraged stakeholders to turn their attention to how much water is being drained from the system, particularly the Murray-Darling Basin.
"The big problem is not who owns the water but the fact that we're using too much of it all together," Professor Quiggin said.
"Simply, too much water has been allocated. In addition there hasn't been enforcement in illegal takings of water."
Mr Whan believed the bigger issue in times of a water shortage was the transparency of the water market.
"Particularly in the time of drought, there is quite a lot of constraint and the price of water is high.
"It's not so much whether it's foreign owned but how the market is working overall and whether or not it is providing enough transparency and information for people to be confident that it is working as it should be," he said.
But Mr Rooney predicted water security was a serious issue to consider for the future of Australia's water supply.
"The World Bank is saying that water security is the third biggest issue that is going to be facing our planet by 2050," Mr Rooney said.
The 2016 World Bank report states some regions could see their growth rates decline by as much as 6 per cent of GDP by 2050 due to water-related impacts on agriculture, health, and incomes.
Mr Rooney said Australia had a very unique and secure water management structure when compared to some other countries.
"We are already seeing now some of those countries experiencing very large water issues and they might be facing cuts in their water supplies by up to 50 to 70 per cent in the next 10 years, and to address their water sustainability issue we are seeing them look at Australia as a water secure nation."
Original source: ABC
TWITTER
FACEBOOK
WHATSAPP
PRINT
E-MAIL
TWITTER
FACEBOOK
WHATSAPP
E-MAIL