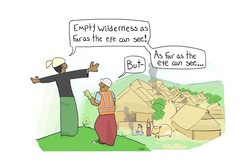 One giant land grab
For millions of smallholder farmers in Myanmar, a deadline has passed.
By March 11, the land that they live and depend on had to be registered with the government in exchange for a permit. This is because the government considers their land, which may have been farmed and conserved for generations by a single community, to be vacant, fallow or virgin, unless proven otherwise.
In other words, in the eyes of revenue-conscious administrators, this land is going to waste, and should be made available for commercial exploitation. Since Myanmar badly needs investment to catch up with its regional peers, and is rich only in land and natural resources, everything must be done to unlock these assets.
This appears to be the motive behind the Vacant, Fallow and Virgin Lands Management Law, enacted in 2012 but amended in September to insert harsher penalties for those “trespassing” on land designated in this way, and for companies who fail to make concessions granted under the law productive.
A government notice issued in October announced a six-month deadline from the passing of the amendments for all occupants of land considered vacant, virgin or fallow to go to their nearest land records office and supply detailed information about their land claim. Those who failed to do so would be considered trespassers, liable to be evicted, fined or imprisoned for up to two years.
For all the government’s claims that the amended law would clarify land claims and reduce landlessness, the permits granted to those who have managed to register their land before the deadline are entirely commercial in nature; they typically last for 30 years and cannot be sold or transferred even to family members.
This law has its roots in a British colonial notion of “wasteland” that consciously undermined the customary land claims of highland communities to the benefit of foreign investors, tradesmen and tax collectors. Today, too, the “wasteland” designation is a convenient fiction.
Vacant, fallow and virgin is a residual category, comprising all land that hasn’t been mapped as farmland, urban land, reserved forest, or in other ways. It accounts for about a third of Myanmar’s territory – close to 50 million acres, only about four million of which has been granted in concessions, leaving a great deal available.
Of this “available” land, more than 80 percent is in the borderland ethnic states. Much of this land is used by ethnic communities according to customary forms of tenure that aren’t recognised in law. Though one of the amendments to the 2012 law exempted “customary lands” from the law’s provisions, this category is not defined here or in any other law, leaving decisions over what counts as “customary” in the hands of officials who might be complicit in land grabs.
The law is therefore not only colonial in origin, but also colonial in its present-day application. Ethnic activists see it as a bid by the central government, a historical oppressor, to seize and exploit their lands; and the government has made little effort to communicate otherwise. It could set the peace process back further, given the priority that ethnic armed groups place on recognising the customary land rights of their communities. Moreover, tens of thousands of people displaced by conflict may eventually return to land now mapped as vacant, fallow or virgin.
Though some have sketched a Doomsday scenario in which millions of farmers could be served eviction notices or hauled into courts from March 12, the government does not have the capacity to do this. As with many laws in Myanmar, its implementation is likely to be highly targeted and linked to specific business or strategic government interests; a banana plantation here, a four-lane highway there.
The harsh six-month deadline helps to create a blank slate in terms of investment and infrastructure construction. It “clarifies” land claims in a way that offers little protection to smallholders and ethnic communities and makes land grabs easier.
Myanmar’s land crisis will play out slowly, but unless the government takes urgent steps now, it may be hard to reverse. These steps should include an immediate halt to the implementation of the law, including a moratorium on all concessions granted under it, until smallholder tenure and ethnic customary land use are given the legal protections that they deserve.