5 key takeaways from launch of ‘Making a Killing’ report 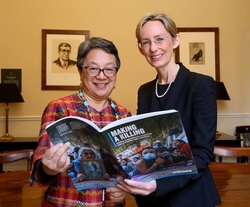 
5 key takeaways from launch of ‘Making a Killing’ report
by Garry Walsh
“I certainly hope that Ireland will take up this challenge to strengthen corporate accountability, protect rights of indigenous peoples and communities to their lands”. This was a call to action from Victoria Tauli Corpuz at the launch event of the ‘Making a Killing’ report in Dublin yesterday.
The UN Special Rapporteur on the rights of indigenous people made it clear that there is an urgent need for global business to respect human rights in their operations, and Ireland can lead the way in taking action.
Trócaire’s new report highlights how corporate greed is leading to land being taken, forests cut down, rivers poisoned. Those who stand up to defend their rights are being harassed, intimidated, even murdered.
The launch of this report marks the start of a new Trócaire campaign calling for a legally binding global treaty governing business and human rights.
Here’s our top 5 take-aways from the discussion at the event:
1. THE GLOBAL LAND GRAB IS GATHERING PACE
The past two decades have seen a global rush for natural resources and large-scale land acquisition.
This race for natural resources in the developing world has led to land six times the size of Ireland being sold to corporations since 2000.
2. INDIGENOUS PEOPLE AND WOMEN ARE PARTICULARLY AFFECTED
Indigenous communities often face the human rights impacts of this race for natural resources, often imposed on communities without consent.
Growing numbers of human rights defenders are risking their lives to defend their communities and their resources. In 2018, 321 human rights defenders were murdered, 77 per cent of whom were working on land, indigenous peoples and environmental rights.
Indigenous people are being ‘killed, forcibly displaced, threatened and intimidated and subject to insidious harassment by criminal charges which often are nebulous, grossly inflated or fictitious’ said Victoria Tauli-Corpuz.
Indigenous people are being defamed as being anti-development, or even being branded as terrorists or guerrillas. Women human rights defenders are also being targeted through threats of sexual violence and smear campaigns.
3. WE NEED TOUGHER REGULATION OF GLOBAL BUSINESS
The 21st century economy is dominated by large transnational corporations. The world’s top 10 corporations have a combined revenue equivalent to more than the 180 ‘poorest’ countries GDP. We live in a world where business knows no border.
Jobs and economic growth allow communities to lift themselves out of poverty. However, the absence of a global legal framework on business and human rights has allowed many businesses to exploit communities.
The global human rights legal framework has not kept pace with the modern globalised economy. It is largely voluntary and is failing to prevent human rights violations.
The ‘Making a Killing’ report argues that devastating human rights violations will continue to occur unless we move beyond voluntary approaches and bring in a legally binding treaty on business and human rights.
Caoimhe de Barra, Trócaire CEO, summed it up succinctly saying "non-binding measures are never really going to prevent human rights violations".
4. IRELAND CAN LEAD AND SET AN EXAMPLE FOR RICH COUNTRIES
All of the speakers agreed that Ireland can play a positive role and should take action to support a UN treaty on business and human rights. A binding treaty could be a game-changer in ensuring that companies respect human rights in their global operations.
Trócaire’s Siobhán Curran, policy officer, said that “a binding treaty is urgently needed to protect the world’s poorest people and ensure their rights are not discarded in the hunt for profits”.
Victoria Tauli-Corpuz urged Ireland to show leadership on corporate accountability, saying that “it is important that a developed country stands up and express its full support for the adoption of a legally binding instrument to regulate corporations. The track record of Ireland in terms of promoting human rights globally places it in a very good position to pursue corporate accountability”.
5. BEWARE OF KILLER KANDY
As well as receiving copies of the 'Making a Killing' report, every attendee at the launch also got a bag of 'Killer Kandy' sweets. This was a little reminder to all that our consumer habits can be very closely linked with human rights issues across the world.
Original source: Trocaire
TWITTER
FACEBOOK
WHATSAPP
PRINT
E-MAIL
TWITTER
FACEBOOK
WHATSAPP
E-MAIL