Calling out the BS in BonSucro 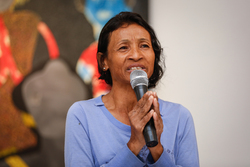 Houy Mai, a villager from Oddar Meanchey province, speaks during a press conference in Phnom Penh on 21 June 2016 about families that have lost land to sugarcane plantations across the country. (Siv Channa/The Cambodia Daily)

Calling out the BS in BonSucro: Why Multistakeholders Initiatives Need to be Held Accountable for their Rights-Abusing Members

This week the world’s biggest sugar producers, traders and buyers are gathering at a luxury hotel in Bangkok for “Bonsucro Global Week” to celebrate their journey to social and environmental sustainability.

Bonsucro, an industry-dominated multi-stakeholder initiative with a mission “to promote sustainable sugarcane production around the world,” is holding its annual conference in Thailand this year to showcase Thai sugar giant Mitr Phol as an exemplar of corporate responsibility.  On the agenda is a tour of one of Mitr Phol’s Thai operations for guests to “see first-hand sustainability in action.”

What they won’t highlighting is Mitr Phol’s legacy of land grabbing and forced displacement in Cambodia.

This hypocrisy has got to end.  That’s why we filed a complaint this week against Bonsucro with the UK National Contact Point for the OECD Guidelines on Multinational Enterprises.

Ten years ago, more than 700 smallholder farming families were violently displaced and stripped of their land, homes and livelihoods to clear the way for a 200-square kilometer land concession that Mitr Phol planned to turn into a sprawling sugar plantation in Northwestern Cambodia.  Those who attempted to defend their community’s land rights were thrown in jail, including Hoy Mai, who was five months pregnant when she was arrested on trumped-up charges after traveling to the capital to petition the Prime Minister for redress.  She suffered through the rest of her pregnancy, gave birth and nursed her infant son in a squalid prison cell during her eight months of confinement. Hoy Mai and thousands of other Cambodians whose land was seized for the plantation have endured over a decade of impoverishment and related hardships as a result.

A few years later, Mitr Phol abandoned its Cambodia project because the land wasn’t sufficiently productive for sugarcane cultivation. Mitr Phol has never provided any form of remediation to the Cambodian families whose lives it destroyed in pursuit of its failed business venture.

Months after the forced evictions took place, Mitr Phol was admitted as a member of Bonsucro. In 2011, we helped Hoy Mai’s community file one of the first complaints ever submitted to Bonsucro’s grievance mechanism, arguing that Mitr Phol was in breach of its commitment to abide by the sugar association’s code of ethical conduct.

Last December, after sitting on the complaint for nearly eight years, Bonsucro’s board dismissed the case on the grounds that it “does not consider that it has received cogent evidence that…Mitr Phol breached the terms of Bonsucro’s Code of Conduct.” The reams of evidence that we provided of illegal land seizures, destruction of private property, forced evictions and deforestation - including an official investigation report from the Thai Human Rights Commission confirming the allegations - was apparently not enough to persuade the self-appointed standard-setter for the sugar industry that its member’s conduct was problematic. And with the case neatly closed, Bonsucro proceeded with its plans to promote Mitr Phol “as a leading member” at its big event this week in Thailand.

It’s high time for voluntary industry standards organizations like Bonsucro to be held accountable to their own human rights responsibilities.  And that’s just what we’re asking the UK National Contact Point to do.

Bonsucro, by design, provides an ethical seal of approval to the companies that it accepts as members. This reputational benefit is used by these companies to advance their business, including attracting investment, finance, customers, and securing land deals for plantations -- all with human rights implications. Consumers, like us, are led to believe we can trust in the Bonsucro label in making responsible purchasing decisions.

Through actively positioning itself as a regulatory body, albeit voluntary in nature, Bonsucro creates a public expectation and arguably a duty of care to meet minimum standards of regulatory oversight. Given the scale of the sugarcane industry and its social, environmental and human rights impacts worldwide, and the large number of enterprises that make up Bonsucro’s membership, it is critical that Bonsucro be held accountable to international human rights standards to ensure the credibility of its public claims.

The OECD Guidelines, which set standards on human rights and other areas of responsible business conduct, themselves encourage membership of multi-stakeholder initiatives as a means by which enterprises can achieve and collectively ensure compliance. They note that members should “[ensure] that these initiatives take due account of their social and economic effects on developing countries and of existing internationally recognised standards.” The intent of the guidelines is to promote these initiatives as one way to strengthen adherence to human rights and promote responsible business conduct. It is certainly not to promote initiatives that would provide cover to its corporate members for violating human rights though its stamp of approval.

One of Bonsucro’s key responsibilities under the guidelines is to use its leverage with its members to address human rights concerns, especially serious ones that are brought to its attention, as we did in the case of Mitr Phol. Bonsucro has special leverage when it comes to the human rights conduct of its members: its very mission is to promote responsible sugarcane, and the reason companies seek membership is to obtain the attendant reputational benefits.

Moreover, Bonsucro’s board and membership consists of the dominant players in the sugar industry, including some of Mitr Phol’s biggest customers, past and present, such as The Coca-Cola Company, PepsiCo, Mars Wrigley, Nestlé and Corbion.  There is little doubt that if these major sugar buyers had acted collectively through Bonsucro, they could have effectively used their leverage with Mitr Phol to provide appropriate remediation for the displaced Cambodian families. But they actively decided not to do so.

In response to our previous blog post on this case, Bonsucro stated:

“(…) We do not expect Members to be perfect before they join and recognise that complex issues could exist that require dialogue and time to resolve. (…) The fact that Mitr Phol was accepted into membership (…) and remains a Member is because they are committed to continuous improvement and are working in complete transparency with us.”

Likewise, we have no expectation that business enterprises rise to the level of “perfection,” either before or after they join a multi-stakeholder initiative like Bonsucro.  However, we do expect businesses to respect basic human rights, including by providing for remediation of serious violations that they have caused.

It renders Bonsucro’s membership criteria a complete farce if the only requirement for a business to join is a commitment to ‘continuous improvement’ - from any baseline, no matter how low and reprehensible, and without any requirement to begin the process of improvement by repairing existing violations that it has caused.  By disregarding continuing violations in considering membership applications, Bonsucro wipes the human rights slate clean for companies wishing to join its club. This represents a fundamental failure of Bonsucro’s human rights due diligence responsibilities.

The fact is, over the years, Mitr Phol never showed any sign that it was willing to acknowledge the adverse impacts it caused and right its wrongs.  It never even once agreed to meet with the community to hear their grievances in person. Such behavior is antithetical to the notion of “continuous improvement.”

Multi-stakeholder initiatives like Bonsucro have proliferated in recent years, as the public demands ethical sourcing of commodities found in consumer products. But rather than representing the gold standard in environmental and social governance as they claim, experiences like ours with Bonsucro put the credibility and legitimacy of these initiatives at risk. Unless these organizations are firmly held accountable to international human rights standards, they will not only fail to push their industries towards more responsible behavior, but they will become little more than window dressing for corporate misconduct.

David Pred and Natalie Bugalski are the co-founders of Inclusive Development International.