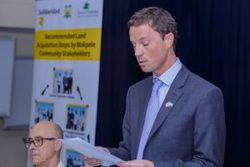 Robert Stansfield of the UK's DFID: land deals should not be ‘land grabs’
Concord Times | 1 March 2019
DFID: Responsible agricultural investment right for Sierra Leone
By Ahmed Sahid Nasralla
The United Kingdom’s Department for International Development’s Economic Growth Team Leader in Sierra Leone, Bobby Stansfield, has said responsible agricultural investment is an important focus of UK Aid to promote trade, investment and private sector development and, it is right for the small West African country.
“This is an area that the UK Government believes passionately about. Responsible agricultural investment is right for the environment, it is right for business and the economy, it is right for communities- especially women, and it is right for Sierra Leone,” said Stansfield.
Stansfield was delivering a statement on Tuesday at a one-day workshop on the Implementation of the National Land Policy in the context of Responsible Agricultural Investments organized by Solidaridad at the Golden Tulip Hotel, Aberdeen, Freetown, on Tuesday 26th February, 2019.
Solidaridad, a not-for-profit organization working around the world to promote good agricultural investment practices, is implementing the UK Aid-funded LEGEND (Land: Enhancing Governance for Economic Development) project in Makpele Chiefdom, Pujehun District, South of Sierra Leone. The Country Representative of Solidaridad, Nicholas Jengre, noted that the open talk model used to restore “peace and unity in Makpele Chiefdom through the reduction in the land leasing agreement by Natural Habitats Sierra Leone should be replicated in other hot spots in Sierra Leone”.
The LEGEND programme has helped 500,000 people in Sierra Leone by mapping and documenting their land rights and a further 62,000 people through their legal empowerment.
Around the world, the UK Aid has helped more than 6.1m people, including 3 million women, to improve their land and property rights since 2011.
But to deliver sustained benefits, noted Stansfield, agricultural investments have to respect existing tenure rights and work with the national and local authorities and traditional leaders.
“We need to work with affected communities to negotiate mutually beneficial land deals that genuinely offer win wins for communities, individual farmers and investors,” he said.
The UK was actively involved in negotiating and implementing the Voluntary Guidelines on the Government of Tenure (VGGT) and endorsed them in 2012. And since then, UK Aid has proudly supported the FAO’s global programme to implement VGGT.
“Moreover, to create decent jobs and raise incomes for rural communities,” continued Stansfield, “we need a lot more investment into agricultural value chains. The costs and consequences of getting this wrong are increasingly clear, with land disputes inflating per hectare operating costs by between 50 and 80%.”
Stansfield made reference to His Excellency President Julius Maada Bio’s emphasis on the creation of an enabling environment for investors and agricultural diversification, describing it as vital for Sierra Leone.
However, he cautioned that in creating such a system it is crucial that the poorest are protected.
“The cost to communities and individual farmers is significant when investments ignore their tenure rights and block access to or damage essential natural resources. It affects the livelihoods, food security and even their very survival,” said Stansfield, adding that this cannot be allowed to happen in Sierra Leone, where customary tenure systems are a sensitive issue in rural areas.
Given these risks, DFID stresses the importance of regulating land deals, including through the Responsible Agricultural Investments principles which Solidaridad has successfully implemented in Makpele chiefdom, foiling potential conflict between community land owners and Natural Habitats Sierra Leone.
In this vein, according to Stansfield, UK Aid  has been supporting a wide range of global initiatives promoting responsible investment in land including: providing guidance to help companies understand the VGGT and apply them in practice; making the case to companies and investors that successful projects need both a legal license to operate from government and a social license from communities, and helping communities to understand their rights and building their capacity to negotiate good deals.
In Sierra Leone, UK Aid is directly investing in responsible agriculture to ensure business can expand to create more jobs and raise incomes for poor people.
The Department is supporting AgDevCo with up to £7m and their new private sector development programme, Invest Salone, will also be looking for opportunities to help businesses grow, sell and export.
So while they work closely with companies and communities, Stansfield noted that the Government clearly also has a critical role to play. He said they are aware that there are many different actors in Sierra Leone working on responsible investment and sometimes there is overlap and insufficient coordination between these efforts.
“That’s why we’re delighted that FAO’s global programme is also considering how to support investment approval processes and work with relevant government projects and ensuring these comply with national regulations,” he said.
The Solidaridad workshop brought together all stakeholders- land owning families/land owners, Paramount Chiefs and other local authorities, Government of Sierra Leone, the private sector, CSOs, women groups, youth groups, donors and the media to share lessons and experiences from their involvement in agricultural investments in the country and charting the way forward to responsible land based investments.