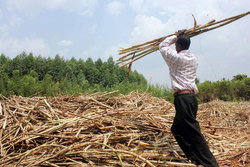 The county government has given the green light for a new investor to move into Yala swamp and takeover existing farms.

The expansive agricultural complex has been lying idle since November 2017 when American firm Dominion Group exited citing an unstable political environment that was not conducive for business.

On Wednesday, Members of the County Assembly passed a motion allowing Lake Agro Limited to set up in the swamp.

According to the motion tabled by Central Alego MCA Leonard Oriaro, the consent granted would be subject to negotiations between the two parties on new terms of the lease.

The motion further read that the company’s request to lease additional land would only be granted upon taking into account issues of community interest.

Yesterday, the MCAs told the county government to engage the National Land Commission to gazette and register the land reserved for the community.

The MCAs also set a condition that investments in the swamp be done on approval of the county assembly’s joint committee of Agriculture, Tourism and Water, and delegated legislation on Yala swamp.

“The governor and the new investor must now follow the law. We are ready to approve everything for as long as it happens in accordance to the law. We do not want our people suffering again,” said Mr Oriaro.

The MCA expressed confidence that the new investor would not mistreat the community “like the former investor” because the county assembly’s strict mandates on legislation and oversight.

On January 17, the county government had resolved to allow a request by Dominion Farms to transfer its lease to Lake Agro Ltd. This was after the company made a request for the land to the county executive in November last year

Oriaro had told the Executive to play their part with respect to the law and Constitution and the MCAs would consider granting approval to the investor after taking into consideration a task force report of how the swamp’s resources could be exploited for the benefit of everybody.

“What remains now is that the Yala swamp report that was approved by the county assembly must act as the basis of bringing credible and proper investments.

“We know the report has brought a chance for residents to benefit from over 5,000 acres of land, unlike in the past. Based on all that, the investment will have an enabling environment,” he said.

The ward reps had earlier said they did not know who owned the firm because they had not been given the company’s profile. But Oriaro said Lake Agro was a subsidiary of the Rai Group of Companies.

Usonga ward representative Sylvester Madialo said the absence of an investor in the swamp had greatly affected the community financially and also through lack of flood control activities.

“The economic gains the investor is bringing on board and the fact that the people we represent will benefit are enough reasons for me to support the motion to have a new investor,” said Mr Madialo.

Last year, West Sugar Company said it had entered into an agreement with Dominion to harvest sugarcane from the farms.