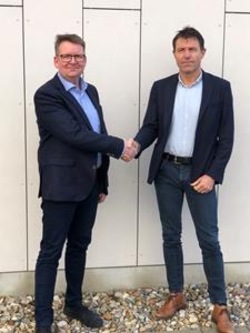 Anders H. Nørgaard, CEO in FirstFarms, and Eskild Hansen, Chairman of the board of directors of Hospoda Invest A/S.
Globe NewsWire | 7 February 2019

FirstFarms A/S purchases pig and crop farm in Slovakia as part of growth strategy
FirstFarms A/S has today entered Head of Terms about purchase of Hospoda Invest A/S. Hospoda Invest A/S owns 100 percent of the Slovak company, JK Gabcikovo s.r.o., which includes both crop and pig production near the Danube-delta in Slovakia.
The Danish FirstFarms A/S, who purchases and operates agriculture in Eastern Europe, expands with the purchase of Hospoda Invest A/S its Slovakian portfolio with pig production.
"With the purchase of Hospoda Invest A/S, we support our ambitious growth strategy to become one of Europe's most effective and sustainable agriculture, along with our strategy about risk spread both geographically and in operation branches," says Anders H. Nørgaard, CEO in FirstFarms.
Chairman of the board of directors in Hospoda Invest A/S, Eskild Hansen, says: "We have now been running for 15 exiting years in Slovakia and achieved some rather good results. But we must also acknowledge that we at the same time have become 15 years older. We started to look for a potential buyer, who would continue to operate JK Gabcikovo in the same spirit as it has been operated so far. It is therefore with a good feeling that we today have made an agreement with FirstFarms A/S.
Good production results
The pig production is divided on four different locations - within 5 kilometers. There are 2,300 sows with a yearly production of 75,000 pigs, of which 40-45,000 are sold as piglets and 30-35,000 as slaughter pigs. The production plants are of high quality, and the production results have been very satisfactory for a number of years.
The production foundation for the crop production is 1,500 hectares of arable land of high quality. Crop rotation is varied, mostly consisting of wheat, rape and maize.
Positive development in the agricultural production
"We expect, that there will be significant synergy effect related to FirstFarms' pig production in Hungary and Czech Republic and our existing crop production in Slovakia," says Anders H. Nørgaard. The agricultural production in Eastern Europe is in a really good development. The price of land is increasing, and the demand for pork is large."
The purchase price is agreed to DKK 185 million for 100% of the share capital in Hospoda Invest A/S.
A due diligence process will be initiated, before the agreement is final.
The purchase of Hospoda Invest A/S is in 2019 expected to have a positive influence on FirstFarms A/S' accounts.
Almost 20,000 hectares of land
With the purchase, FirstFarms owns a "land bank" of more than 8,500 hectares of owned land and more than 11,000 hectares rent contracts - a total of 19,500 hectares of agricultural land in operation.
"All owned land is booked at purchase prices and not market prices. Thus, we have significant reserves, which are not included in our booked equity," says Anders H. Nørgaard.
For further information:
Please visit our website www.firstfarms.com or contact CEO Anders H. Nørgaard on telephone +45 75 86 87 87.
About FirstFarms:
FirstFarms is a Danish stock exchange listed company, which purchases and operates agriculture in Eastern Europe. We develop the individual farms to modern and sustainable businesses that deliver milk, meat and grains of the highest quality to the dinner tables all over the world.