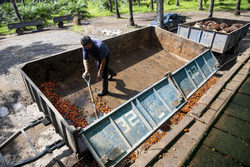 A Mongabay Latam series (in Spanish) on the oil palm industry in several Latin American countries has revealed that the advance of oil palm monocultures in Latin America – especially Peru, Ecuador, Guatemala, Honduras, Costa Rica and Colombia – since 2000 has resulted in illegalities, deforestation, environmental pressures, and conflicts with local communities. Below, IDM highlights some of the findings on Peru, Ecuador and Guatemala.

In Peru, the oil palm company Palmas de Huallaga S.A.C. has been linked to a number of irregularities. The company, which controls 103 properties totalling 1,900 hectares in the Peruvian Amazon, is alleged to have cleared forests in protected areas in at least five of its properties. In one of them, the company cleared more than 100 ha of native vegetation. The Peruvian NGO Paz y Esperanza, claims that the Regional Environmental Authority (ARA) approved Palma de Huallaga’s land use change without carrying out the proper environmental assessments. Paz y Esperanza has also found that the company cleared forests in at least two of its properties prior to obtaining licenses to do so, which is illegal.

Other illegalities associated with Palma de Huallaga include not respecting the legal requirement of keeping 30 percent of forest cover in its properties (21 cases), deforesting river banks (6 cases) and failing to respect its properties’ boundaries by clearing adjacent forests (4 cases).

Sidney Novoa, director of Tecnologías de Conservación Amazónica (ACCA), told Mongabay that Palma de Huallaga’s strategy of acquiring small plots from individual residents of indigenous Kechwa communities leads to a situation of patchy “forest islands” that lose their ecosystemic value due to the loss of sizeable expanses of forest. The company did not respond to Mongabay’s requests for comments.

In Ecuador, Energy & Palma, one of the country’s largest oil palm companies, has been accused of illegally acquiring the ancestral lands of Afro-Ecuadorian communities in the San Lorenzo region, one of the poorest in Ecuador. The 5 de Junio community, which claims that their ancestors have inhabited the area since the 1530s after escaping slavery, is in a legal battle with the company to keep 1,000 ha of its lands.

Residents told Mongabay that in late 2015 they were ordered to leave the community after a judge accepted a legal complaint of trespassing presented by Energy & Palma, which has controls over 11,000 ha of plantations in San Lorenzo. In 2016, company staff and over 60 police officers arrived at the 5 de Junio introducing machinery, damaging their crops and intimidating residents. The community’s legal complaints were rejected by a judge. In retaliation, the community seized one of the company’s trackhoes, which has led to lawsuits presented by Energy & Palma against the community for theft (the community has since returned the trackhoe).

The problem started in 2000 when a 5 de Junio resident is alleged to have illegally sold community lands to the company Palmaceite Humbici S.A. less than a month after receiving titles to the property from the National Institute for Agrarian Development (INDA) in suspicious circumstances. Years later Palmaceite Humbici would sell the property – 1,600 ha – to Energy & Palma.

Ítalo Quintero, an analyst at the Ancestral Lands Unit of the Agriculture Ministry, told Mongabay that since 2000 palm companies have employed a number of tactics to irregularly acquire ancestral lands from Afro-Ecuadorian communities, including buying properties from intermediaries, invading land or using threats and pressure against residents. All this despite the fact that the 1998 and 2008 Constitutions grant communities the right to their ancestral lands, meaning they cannot be sold or bought. But the persistent failure by Ecuadorian authorities to grant collective titles to the communities allows companies to take advantage of the situation to illegally buy individual plots.

According to John Herlyn Anton Sánchez and Fernando García from the Instituto de Altos Estudios Nacionales (IAEN), Afro-Ecuadorian communities have lost over 30,000 ha of ancestral lands to palm companies since their rights were granted, mostly because of illegal actions by the companies. More than a quarter of 5 de Junio residents have left the community due to lack of  prospects, conflict and the risk of being left without land. The community continues to fight for their lands in court. Energy & Palma did not respond to Mongabay’s requests for comments.

In Guatemala, the oil palm company Reforestadora de Palmas del Petén S.A. (REPSA) has been connected to the worst case of industrial pollution ever recorded in the country. In 2015, between 40 and 70 metric tons of fish died in the river La Pasión, department of Petén, after REPSA allegedly dumped great quantities of organic matter – originating from its processing and refining operations – on the river, depriving it of oxygen and suffocating the fish.

Local communities relied heavily on fishing for their food and livelihoods. It is estimated that between 31 and 54 percent of local fish production was lost. The case has been stuck in the justice system and no one has been held responsible. No compensation has been paid to local fishermen or fish sellers, many of whom have taken up illegal logging as an alternative economic activity or migrated. REPSA claims to have contributed fully with investigations. The company successfully appealed against a September 2015 court order to temporarily close it for six months.

Image on homepage courtesy of Mongabay