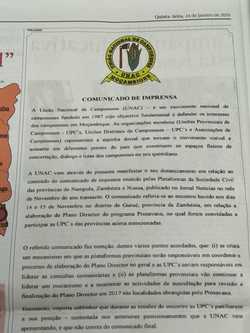 The National Peasants' Union (UNAC) is a national movement of peasants founded in 1987 whose main objective is to defend the interests of Mozambican peasants. The member organisations (provincial peasants' unions - UPCs, district peasants' unions - UDCs and peasant associations) are the backbone of the organisation. They make the movement visible and active in different parts of the country and provide it with the physical space for constant dialogue, agreement and struggle.

UNAC hereby dissociates itself from the content of a press release issued by the Civil Society Platforms of the provinces of Nampula, Zambezia and Niassa, which was published in the national newspaper Jornal Notícias, in November last year. The statement referred to a meeting held on 14 and 15 November in the district of Gurué, province of Zambézia, in preparation of the Master Plan of the Prosavana programme. The UPCs of the provinces mentioned above were invited to take part in the meeting.

The press release mentions, among several agreed points, the following commitments: (i) that a new mechanism will be created whereby the provincial platforms will be responsible for coordinating the overall elaboration of the Master Plan and the UPCs will be responsible for leading community consultations; (ii) that the provincial platforms will continue to lead the mechanism and monitor the consultations for the review and finalization of the Master Plan in 2017 in the locations covered by Prosavana.

However, it is important to underline that the UPCs clearly stated their position during the sessions of the meeting, a position that was stated on numerous occasions previously by UNAC, and yet this position was not acknowledged in the final communiqué.

UNAC completely rejects the above two commitments and others contained in the press release that was issued by the Civil Society Platforms, which gives the false impression that the UPCs present at the meeting agreed to these commitments.

In addition, we reaffirm our position that:
UNAC remains steadfast in its struggle for greater peasant leadership (men, women and young people) in the construction of a more prosperous, fair and mutually supportive society, where the rights of peasants are not mortgaged or alienated.