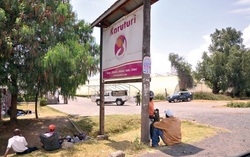 By Kepha Muiruri
In Summary
The decision by the Supreme Court's Court of Appeal gives the green light to Stanbic Bank Plc to dispose off Karuturi Limited assets as foreclosure to defaulted loans totaling to Ksh. 621 million in the flower farm's pre-receivership
The dismissal to put an injunction on the foreclosure upholds High Court's decision in January, 2018 which chose to have Karuturi handover assets should its directors' default on a second shot at loan repayment under court orders following objections by shareholders on the original foreclosure plan.
Stanbic Bank is seeking to reclaim a further Ksh. 1.4 billion in arrears from the settlement of the flower farm's expenses during the receivership period.

Flower farm Karuturi Limited lost its battle to have the Supreme Court put up an injunction to stop Stanbic Bank Plc from attaching itself to company assets as foreclosure to defaulted loans totaling to Ksh. 621 million, issued in two installments between the years 2010 and 2013.
The dismissal by the Supreme Court’s Court of Appeal on Friday gives Stanbic Bank the green light to auction off all charged assets belonging to Karuturi Limited and those of its loan guarantors- the Surya Holding Limited and Rhea Holdings Limited.
“The decision of the court will allow for the conclusion of the sale process that had commenced before the filing of the appeal,” noted Muniu Thoithi, one of the joint receivers for Stanbic Bank.
The decision by the Court of Appeal upholds a similar High Court ruling in mid-January 2018 which too chose to have Karuturi Limited handover its assets to the lender should the farm’s directors’ default on a second opportunity to clear the outstanding debt under court orders following the objections by shareholders over the original foreclosure plan.
Stanbic Bank joint receivers are now at liberty to resume the process of disposing off Karuturi Limited assets as the lender likewise seeks to unload Karuturi’s land under legal charges.
The decision leaves Kenya’s former largest flower exporter, now under receivership since February 2014 in ruins and compounds further on the flower farm’s troubles to include the neglect of the company’s flower farms.
Stanbic has been insistent on settlement of all debt to include a further Ksh. 1.4 billion which accrues from the lender’s contribution to the settlement of Karuturi’s expenses during the receivership period where its two appointees- Ian Small and Kieran Day run the flower farm as receiver managers.
Original source: Citizen
TWITTER
FACEBOOK
WHATSAPP
PRINT
E-MAIL
TWITTER
FACEBOOK
WHATSAPP
E-MAIL