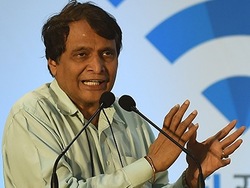 Suresh Prabhu, India's Union Minister for Commerce & Industry, says Saudi Arabia and UAE will be using India as a base for their food security.
Indian Express | 14 January 2019

by Abha Toppo
Suresh Prabhu, Union Minister for Commerce & Industry and Civil Aviation on 13th January said Saudi Arabia and the UAE have shown interest in investing in India’s agricultural sector.
The minister while addressing the valedictory session of the 2-day CII Partnership Summit said, “Saudi Arabia and UAE will be using India as a base for food security and exports for the same have been recognized. India produces around 290 million tonnes of foodgrain and 305 - 310 million tonnes of horticulture. Thus there is great potential to export and we will work with the state governments for this. Moreover, investment in Indian logistics sector is expected from the UAE, Saudi Arabia, and 15 to 20 nations from other parts of the world”.
He further said, “In the export policy, we have decided to remove all limitations on organic products and processed products. Both Saudi Arabia and the UAE want to invest in organic as well as food processing industries. This will be a win-win situation for Saudi, the UAE, other GCC nations and India, mainly for our farmers, who want better prices for their produce”.
The minister also said the government is keen on developing mutual trade relations with more countries adding “We as a country are supporting open trade with all the nations… but we also want to develop mutual trade agreements with other countries. For each of the geographies we are keen to have free trade agreements with the Latin American, African and Southeast Asian countries”.
It must be noted that there has been an ongoing conversation with Sri Lanka for a Comprehensive Economic Partnership Agreement. Prabhu said, “There is huge prospective for agriculture exports… the recently approved Agriculture Export Policy will give a boost not only to agriculture but also to plantation, horticulture, fisheries and dairy sectors. The policy will help obtain good price for agricultural produce”.
The minister also said districts having potential for particular industries and items will be identified and will be developed as clusters for the development of that sector. In the pilot project to be started, 6 districts from 5 states will be developed including Maharashtra’s Sindhudurg and Ratnagiri regions.
Prabhu mentioned that the Global Aviation Summit 2019 scheduled to be held on 15th January in Mumbai will announce the maiden air cargo policy. He added that this will promote air connectivity to export perishable agricultural goods. Around 1000 delegates from 46 countries, including industrialists, businesses, politicians, multilateral agencies and UN organizations attended the Partnership Summit.