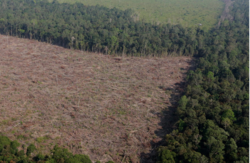 Palm oil companies continue to criminalize farmers in Sumatra
Commentary by Gaurav Madan, Senior Forests and Lands Campaigner at Friends of the Earth

This post is a commentary. The views expressed are those of the author, not necessarily Mongabay
On a late night in December, I arrived in the village of Lunjuk on the Indonesian island of Sumatra. A warm breeze welcomed me as I sat down with 30 women and men from Forum Petani Bersatu — the local farmers’ union — who had gathered to share stories of their ongoing struggle to reclaim their land.
My visit came almost five years after Friends of the Earth U.S. reported about escalating conflict between farmers and palm oil company PT Sandabi Indah Lestari — or PT SIL. The case featured disturbing details of land grabbing, violence, and dispossession of local communities. According to farmers in Lunjuk, the company destroyed farms and homes, forcibly displaced families, and had villagers arrested on dubious charges.
Nearly five years later, communities remain in conflict with PT SIL, which supplies Wilmar International, the world’s largest palm oil trader.
After introductions had been made and locally grown ginger tea was served, farmers explained that PT SIL’s approach has shifted. They said that PT SIL continues to operate on their traditional lands without their consent, despite local and international efforts to address the conflict. However, instead of actively clearing villagers’ farms and forests, as the company has done in the past, PT SIL has been relying on the police and courts to annex community lands for its plantation.
“Criminalization is now the strategy being used by the company. Sometimes when villagers are harvesting their own palm oil, the company calls the police and accuses them of stealing. They then say that they will only release them if they hand over their lands to the company,” said Osian Pakpahan, head of the farmers’ union.
Sukardi, another member of the union, described how, just the week before, police threatened him with arrest in an attempt to force him to hand over his land to the company. Other farmers provided similar stories of being charged with crimes to force them to give up their land.
PT SIL’s operations in Seluma district, where Lunjuk lies, have been marred with land conflicts since the company arrived in 2011. Community leaders and civil society organizations have consistently claimed that the company ignores the existing customary land rights of local residents and does not have the proper licenses to operate within the district. In 2014, the situation devolved into violence when, according to villagers, PT SIL cleared farms with armed paramilitary at its side. In response, villagers clashed with paramilitary forces and set fire to company machinery.
The entrenched conflict poses significant risks to PT SIL, its partner Wilmar, their investors, and the consumer brands sourcing palm oil grown on PT SIL’s plantations. A 2016 study into the monetary costs of social conflict in Indonesian oil palm found that the tangible cost of conflict was as high as $2.5 million. The largest direct costs were due to disrupted plantation operations and diversion of staff time to address conflicts. The study found indirect costs between $60,000 and $9 million from the escalation of conflict, reputational loss, and the risk of violence to property and people.
In 2015, Wilmar conducted multiple visits to Seluma district, meeting with community leaders, civil society organizations, and representatives from the farmers’ union, after farmers directly asked Wilmar to stop sourcing from PT SIL at a meeting of the Roundtable on Sustainable Palm Oil — the industry sustainability body. Today, according to data available on Wilmar’s traceability dashboard, PT SIL and its parent company Lintas Samudera are still supplying one of Wilmar’s Sumatran refineries.
Neither PT SIL nor Wilmar responded to requests for comment for this story.
PT SIL’s continuous alleged violations come at a time when there is a growing acknowledgement of the destructive nature of the palm oil industry due to its role in driving deforestation and climate change around the world. After fossil fuels, deforestation is the second-largest contributor to carbon emissions responsible for global climate change. Additionally, land conflicts like the one in Lunjuk constitute material and reputational risks to companies and investors alike, while frequently violating the land rights of local communities.
Wilmar recently announced plans to comprehensively map its suppliers as part of its effort to prevent deforestation in its supply chain. However, eight years of land conflict and the ongoing use of criminalization to force communities to give up their land to PT SIL raises questions over Wilmar’s commitment to ensuring no exploitation in its supply chain.
In Lunjuk, despite the sustained conflict and failed attempts at resolution by Wilmar and others, there is a resolute commitment by farmers to protect their traditional lands. And while there is a growing global debate on whether palm oil products should be altogether boycotted, recognizing and respecting the existing land rights of communities is an effective strategy for preventing deforestation and mitigating climate change. Another significant step would be for companies and investors to cease financing operations that violate communities’ rights and proliferate violence and dispossession.
As Pakpahan, head of the farmers’ union, said, “We do not know which way to get our land recognized by the government but we will keep advocating for our rights. What we do know is that the government should review the concession and recognize our rights over our community lands.”
Original source: Mongabay
TWITTER
FACEBOOK
WHATSAPP
PRINT
E-MAIL
TWITTER
FACEBOOK
WHATSAPP
E-MAIL