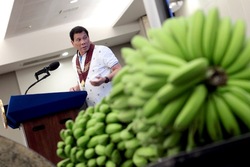 Russian businessmen to invest P8B in Camp Abubakar banana plantation
By TED CORDERO
A group of Russian investors are interested in investing around P8 billion in a Cavendish banana plantation in Camp Abubakar in Buldon, Maguindanao.
The place is the previous stronghold of the Moro Islamic Liberation Front (MILF), Agriculture Secretary Emmanuel Piñol said Tuesday. He did not identify the Russian investors.
The Russian investors, accompanied by Piñol and Maguindanao Governor Esmael Mangudadatu, inspected the area in Barangay Oring on Monday and identified 5,000 hectares suitable for midland bananas and 2,000 hectares for highland bananas.
“The Russians were impressed by the area, because it is surrounded by criss-crossing rivers, which is ideal for irrigation,” Piñol said in a press conference in Pasay City.
“The estimated investment could be about P8 billion in the next two or three years …” he said.
The Russians became interested in sourcing bananas directly after learning that the bananas they import from China are mainly from the Philippines.
“Indirectly, they are importing bananas from us so they want to source it directly from here,” Piñol said.
Piñol and other government officials will meet again with the Russians at the Department of Agriculture Central Office on January 24.
“The DA, the local government of Maguindanao, and the MILF committee will be meeting with the Russian group to finalize the arrangements such as the use of land and profit-sharing. They will define these arrangements during the upcoming meeting,” Piñol said.
The project is expected to employ about 10,000 workers, most of whom are former rebel combatants and their children, he said.