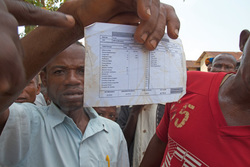 In November 2018, RIAO-RDC filed a complaint against Feronia Inc on behalf of nine communities in DR Congo. Photo: Argia

The panel of the complaints mechanism for the German, Dutch and French development banks has ruled that a complaint submitted on 5 November 2018 by nine communities in the DR Congo is admissible. This means that the complaints mechanism will now begin a preliminary review process before initiating the mediation process requested by the communities to resolve their long-standing land conflict with Plantations et Huileries du Congo (PHC), a subsidiary of Canadian company, Feronia Inc.

The international coalition of civil society organisations from within and outside of the DR Congo who support the demands of the communities welcome this decision. They see it as an important test case to assess the effectiveness of such complaints mechanisms set up by development banks and the commitment of banks to them. The complaint takes on particular relevance given the fact that it will be the first complaint to the complaints mechanism of the German, Dutch and French development banks to apply mediation, as opposed to a mere compliance review of the banks. In addition, the complaint centres on human rights and land legacy issues which are a common source of conflicts surrounding development bank investments in agribusiness companies.

Development banks are deeply invested in Feronia and its subsidiary PHC. They have a combined controlling interest in the shares of Feronia, with the UK's CDC alone holding over 30 percent. Representatives of the CDC and the African Agricultural Fund, which manages a fund backed by the French and other development banks, have five seats on Feronia's board of directors. Moreover, a consortium of development banks led by the German DEG, and including the Belgian BIO and Dutch FMO, which provided PHC with a $49 million loan facility, have tremendous leverage over the company due to the large outstanding debts that they are owed. Given this level of control that the development banks have over Feronia, this should ensure that the company will engage constructively in the mediation process.

The decision from the complaints mechanism is available here: https://www.deginvest.de/%C3%9Cber-uns/Verantwortung/Beschwerdemanagement/Feronia/index-2.html