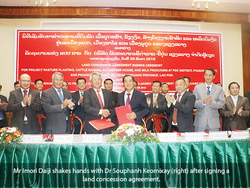 A 3,552 ha land concession in XiengKhuang province will be granted to Lao-Jagro Development XiengKhuang Co, a company 51% owned by the Vietnamese dairy company Vinamilk.
Vientiane Times | 22 December 2018
Livestock company inks deal for more land in XiengKhuang
Lao-Jagro Development XiengKhuang Co., Ltd. on Thursday signed an agreement with the government to expand investments in pasture planting, cattle farming, slaughterhouses and milk production.
Under the agreement with the Ministry of Planning and Investment, land concessions totaling 3,552 hectares will be granted to the company in Paek, Phaxay, and Phoukoud districts of XiengKhuang province.
The agreement was signed by the director of Lao-Jagro Development, MrImoriDaiji, and the Minister of Planning and Investment, DrSouphanhKeomixay.
MrKhamphengVongkhanty, who is on the company’s Board of Directors, said Lao Jagro Development was established in 2015 in XiengKhuang with the aim of producing meat and livestock products for domestic consumption and export.
The company registered capital of US$5 million for a 500 hectare land concession to develop dairy farming and animal husbandry.
By the end of 2015, the company had imported 900 cattle.  This included 250 milking cows from Australia that were transported by three charter flights directly to Vientiane, making headlines at the time.
Now, the company has 1,500 head of cattle and its investments total US$15 million with assets worth an estimated US$38 million.
If the company was to continue growing, MrKhampheng said it was necessary to expand the amount of land and pasture available. It was for this reason the company applied to the authorities in XiengKhuang and the Lao government for more land.
After several studies and many meetings, the government agreed to grant 3,552 hectares of land.
Lao Jagro Development is currently making plans with the Vietnamese firm Vinamilk to import and use updated farming technologies in its own enterprises.
MrKhampheng said he hoped the agreement would contribute significantly to the Lao economy and that higher quality food would result for people in Laos and elsewhere.
MrSouphanh said the project would play an important role in Laos’ economic development as well as in meeting the government’s goals to encourage modern agricultural practices.
He noted that the company was already using Japanese technology which would help to increase exports. Furthermore, under the agreement locals may benefit from the company’s expansion through work and investment opportunities.
MrSouphanh said the project could expand further in consideration of the land concession as required.