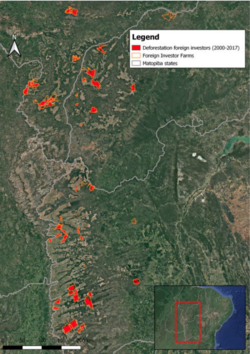 Brazil is one of the top target countries for farmland investment deals, because of the potential for high yields and productivity. The country has been an attractive destination for investors who buy farmland to diversify their portfolios and seek stable returns. Following the financial crisis of 2007 and 2008, institutional investors, including pension funds, university endowments and private equity, invested heavily in newly formed rural real estate corporations. This paper analyses deforestation rates at Brazilian farms with foreign investment. It describes the linkages between foreign investments in Brazilian farmland and the deforestation of this farmland since 2000, with a focus on Matopiba, the region consisting of the states of Maranhão, Tocantins, Piauí and Bahia.
Key Findings
• Ten foreign investors hold over 1.5 million hectares (ha) of Brazilian farmland.
Brazil is one of the top four target countries for transnational land deals, despite tightened restrictions on international land acquisitions. Investment entities provide limited transparency on farmland holdings.
• The Cerrado, a large tropical savanna biome that covers more than 20 percent of Brazil and has seen high rates of deforestation, is at the heart of farmland investment growth. Eight companies backed by foreign investors control at least 868,488 ha of farmland in Matopiba, representing 18 percent of total agricultural land. Foreign investors include Harvard University, Cresud and Nuveen.
• Foreign-held farms in Matopiba have seen at least 423,242 ha of deforestation since 2000. This represents 22 percent of total deforestation in Matopiba between 2000-2017. Farms held by BrasilAgro and Nuveen have seen the highest rates. However, deforestation rates have decreased significantly in the past six years. An estimated 171,867 ha of native vegetation remains on the 48 identified farms.
• Nuveen, the global asset management subsidiary of the TIAA, is the only foreign farmland investor with a zero-deforestation policy. Adopted in 2018, this policy includes a commitment not to purchase land in Brazil that has been cleared from native vegetation. For the Cerrado the cut-off date is set at May 2009, unless in accordance with the Roundtable for Responsible Soy (RTRS). The policy’s language
suggests that its scope does not extend to farms already held in its portfolio.
• In addition to driving deforestation, farmland investments have often been associated with land grabbing. Harvard’s Endowment Funds and Nuveen invest in farms that have been subject to legal proceedings concerning the legality of land titles. Those same farms have seen high rates of deforestation.
• Deforestation and land grabbing are examples of ESG risks that could indirectly affect investors in farmland investment funds. Investors in farmland funds or listed land owners could face exposure to reputational risks. Furthermore, farmland assets in Matopiba may be at risk of becoming stranded.