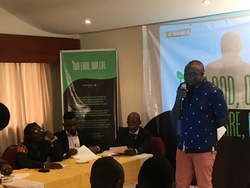 Greenpeace Africa and Cameroonian artists launch campaign against land grabbing
Greenpeace Africa, in partnership with Nsang Dilong, Freddy Kristel and Alene Menget, is launching a campaign against land grabbing using videos, an online and offline petition in Cameroon. The launch of the campaign in Douala comes after a field visit to the villages of Bitye, Edjom, Ndibessong, Zoumeyo and Ekok, which highlighted the fate of local and indigenous communities and unregulated land grabbing in Cameroon .
"The socio-economic consequences of land grabbing in our local communities are far-reaching," Nsang Dilong said. "We lend our voice to this Greenpeace Africa campaign as Cameroonians and committed artists. We use our videos to support local communities in the fight against the misdeeds of rubber companies such as Sudcam, a subsidiary of Halcyon Agri. We want the customary rights to the lands of these communities to be respected and the forest on which they depend for their livelihood to be protected, "Dilong added.
The videos and humorous sketches are a means used by actors such as Nsang Dilong, Freddy Kristel and AleneMenget to present the serious problem of land grabbing in a way that is understandable to all Cameroonians. The videos can be viewed via this link. Also, a call is made to all Cameroonians in particular, and Africans in general, to take action against the problem of land grabbing by signing this online petition against Sudcam, a classic case of grabbing lands.
"Sudcam's activities deprive us of our livelihood and we have no reliable institutions to handle our grievances," said Mekoulou Ondo Thomas of the Edjom community. "We are working in partnership with Greenpeace and other artists as part of this campaign against land grabbing because we know that the more people we have, the more chance we have to make our voices heard. bring the competent authorities to act. We call on our senators and parliamentarians to enact appropriate laws to protect us from Sudcam's activities, "said Mekoulou.
The company has cleared more than 10,000 hectares of forest to plant rubber. As a result, some local and indigenous communities in the southern region have been displaced and have not yet been adequately compensated for their lands. There is also irresponsible land acquisition and management for natural rubber cultivation and the disregard of customary land rights, which undermines the food supply of local and indigenous communities.
"Greenpeace Africa is concerned about land grabbing activities by multinationals such as Sudcam in South Cameroon. With the launch of this campaign, we call on Sudcam to engage in a process of conflict resolution with local and indigenous communities, and put an end to deforestation. Sudcam must give priority to land restitution and adequately compensate displaced communities. The company should also publicly disclose all documents relating to its ownership, the land acquisition process and the environmental and social impact assessment it has carried out, "said Eric Ini, in charge of the campaign for the forest at Greenpeace Africa.
Distributed by APO Group for Greenpeace.