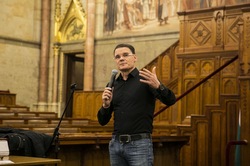 Hungarian legislator Erik Bánki claims his farmland purchases in Romania were financed from loans from foreign and Hungarian companies but he does not remember the names of these companies.(Photo: Tamás Botos, 444.hu)
OCCRP | 11 December 2018

Failed bioethanol project in Romania leaves unanswered questions for Hungarian legislator
BY BLANKA ZOLDI, DIREKT36, AND ANA POENARIU, RISE PROJECT
On a Hungarian TV news program in 2008, a businessman promoted a big investment plan: the construction of two bioethanol factories in neighboring Romania that would buy up crops produced by farmers and turn them into fuel.
“I think it will provide a good livelihood for them,” said Erik Bánki, identified as the Hungarian manager of HP Investment, a Romanian company proposing to invest €70 million to build one of the factories.
Bánki wasn’t merely a businessman — he was an influential politician. Since 1998, he has served as a legislator in the Hungarian Parliament, rising to a powerful position with the governing Fidesz Party as head of the Economic Committee.

A joint investigation by two OCCRP partners, Direkt36 in Hungary and RISE Project in Romania, found that, between 2007 and 2010, Bánki spent almost €1 million through several companies to buy more than 110 hectares of land in Romania, including the proposed locations of the two factories.

He has never declared the details of his business in Romania, and the law governing Hungarian officials does not explicitly require him to do so. However, according to documents examined by OCCRP partners Direkt36 and RISE Project, the details of the deals raise serious questions.

First, there’s the matter of the acquisition of the land. Some of the purchases Bánki made required tenders from at least two companies — and the only other company that submitted a bid was co-owned by his cousin. Given his income declarations, it’s unclear where the money for the land could have come from. And his statements to reporters about possible financing for the bioethanol project are contradicted by a contract examined by reporters.

Moreover, Romanian court documents show that the promised bioethanol factories were never built and that Bánki’s companies accumulated more than €2.3 million of debt to local governments, consisting mostly of unpaid penalties due to the ultimate failure of the enterprise. These debts were eventually settled for just 17 percent of their value when authorities took over land Bánki had bought for about €390,000 in lieu of repayment.

Today, most of Bánki’s Romanian companies no longer exist, and his remaining land in the country is the subject of bankruptcy proceedings.
Partial Declarations
Hungarian law requires parliamentarians to file annual asset statements to give a full picture of their financial situation. Direkt36 checked Bánki’s declarations from 2000 to 2018, in which he reported that he has bought more than 200 hectares in Hungary since 2015, but he never declared the land bought by his companies in Romania.

The Hungarian law on asset declaration does not clearly spell out whether parliamentarians must declare only directly owned assets, or also assets owned through companies. While some deputies do declare indirectly owned assets, Bánki only declared the existence of his Romanian companies, including neither the land he bought through them nor the public debts they incurred.

Bánki told Direkt36 there was no reason for him to do so. “The assets of a company and private ownership are different things,” he said. “If real estate is owned by a company, it is not owned by a private person.” Records show that Bánki owned 90 percent of one company that purchased the land and 100 percent of the other.

Nor do Bánki’s asset declarations offer any clues about where he got the almost €1 million he spent on Romanian land between 2007 and 2010.

A review of his annual declarations and wage records from 2000 shows that Bánki’s official salary as a politician oscillated between €20,900 and €39,000 annually, while his Hungarian and Romanian companies either lost money or posted only smaller profits, not enough to cover the land purchases. The debt of one of his companies grew from about €291,000 in 2007 to €688,000 in 2010.