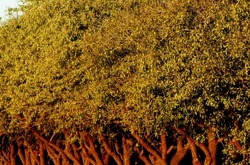 Warakirri Asset Management has launched a new agriculture fund seeking to raise $100 million by early 2019, with a target of growing to $300 million in the longer term.
Warakirri, which manages agricultural investments for super funds such as REST, has set up the Warakirri Diversified Agriculture Fund, which will invest in 'high-value' farms and farming infrastructure.
That means none of the traditional broadacre cropping or grazing so characteristic of Australian agriculture.
The fund will be led by Adrian Goonan, who has been an agriculture investment manager at Warakirri for more than 10 years.
"We are unlikely to be buying broadacre cropping, mixed farming, grazing or dairy farms," Mr Goonan said. "We will focus on the higher value such as nuts, fruit, vineyards, agricultural infrastructure such as logistics and processing assets, as well as water and poultry.
The incentive to start the fund follows an increase in interest from outside of super funds – Warakirri's traditional investment base.
"We are already managing significant discrete agricultural investments for super funds, but this new fund is being set up in response to demand for a different segment of investors – the private family offices, high-net-worth and not-for-profit community," he said.
And he is not concerned about the timing in the market, where farm values have risen significantly in the last five years.
"We are not concerned about the timing of the market and values of certain sectors because we are building a diverse portfolio with a long-term perspective and we are prepared to be patient," he said.
The fund is aiming to provide its investors with strong risk-adjusted returns via stable lease income and long-term capital growth, with a low level of volatility.
"We will partner with operators to buy farms and then lease them. This is an own-and-lease strategy which will produce consistent quarterly income and long-term capital growth."
Warakirri's move follows other operators' decision to launch funds, with farm manager Growth Farms also raising $100 million to buy rural properties across Australia and lease them back to farmers.
"Australia is a big place with plenty of value opportunities, but no doubt there is still competition," Mr Goonan said.
Warakirri manages about $2.1 billion in both funds under management and commitments.