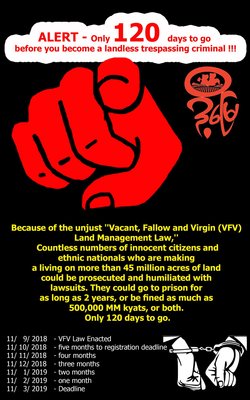 Below is the statement issued by Civil Society Organisations in Myanmar endorsed by 346 local organizations:

Despite continuing & serious public opposition to the Vacant, Fallow & Virgin Land Management Law and the amendments, it was passed on 11 September 2018. A short time later on 30 September 2018 the Vacant, Fallow & Virgin Land Management Central Committee issued a letter notifying the public that the persons and organizations currently using the vacant, fallow & virgin land without permission from the Central Committee must register the land.

Section 22(b) of the law requires users to register the land in accordance with specifications within 6 months after the enactment of the law. Moreover, according to section 27(a), anyone using the vacant, fallow & virgin land without permission of central committee shall be punished with imprisonment for a term not exceeding two years or with fine not exceeding Kyat five lakhs or with both; as they violate the section 22(b-iii).

Our standpoint on the newly amended law and related announcement is the following:

1.      The National Land Use Policy was adopted by the President’s Office during January 2016. It mandates the National Land Use Central Committee to make a new overarching national land law to replace some 60 land-related laws currently in existence. Section 66(b) of the National Land Use Policy Part-8 - Land Use Rights of the Ethnic Nationalities – stipulates formal recognition and protection of customary land tenure rights and related local customary land management practices of ethnic groups, whether or not existing land use is registered, recorded or mapped. The Vacant, Fallow & Virgin Land Management Law 2018 directly contradicts and undermines that policy provision.

2.      At first glance, the new Vacant, Fallow & Virgin Land Management Law’s Section 30(b) seems to recognize ethnic peoples’ customary land use. However, in the absence of complimentary specifications and operational provisions, this section actually facilitates people to lose their land in another way.

3.      The Vacant, Fallow & Virgin Land Management Law is polar opposite to the federal democratic norms that ethnic people expressed their desire for during the 21st Cenury Pinglon Peace Process. It neglects the discussions that have taken place through that process, rendering them meaningless. This means the new law would impact seriously on the peace process that the Government and ethnic armed organizations are engaging in. This means that it is ineffective to amend, and instead necessary to abolish the law completely.

4.      There is no vacant, fallow & virgin land in ethnic areas. The recently enacted Vacant, Fallow & Virgin Land Management Law is a law that facilitates making people who depend for their lives on land & forest to become landless. Instead of accepting and enacting this law, the fundamental priority must instead be to effectively recognize customary practices and communal land rights, and to safeguard the interest of the peoples depending on land.

5.      The present law is an unjust law that prioritizes the creation of a land market for investors to come in the name of development. This law makes millions of people into landless criminals; and it eliminates their livelihoods, cultures, identity and social status. Therefore, the government must abolish this law and enact a federal land law that safeguards peoples’ integrity, their lives and livelihoods and their identities.

6.      This law does not take into consideration people who have been displaced by various conflicts, and instead it constitutes an effort to grab the land of ethnic peoples across the country. Genuine peace is possible only if the government formulates a law recognizing self-determination and customary rights of ethnic peoples based on federal democratic norms for land & natural resource governance.

7.      Since the original enactment of both the Farmland Law and the Vacant, Fallow & Virgin Land Management law at the same time on 30 March 2012, cases of land grabbing and lawsuits against farmers have massively increased. In order to suppress the peoples’ movements against land grabbing, these laws were proposed with more penalties in 2017 and the Land Acquisition Bill was also proposed to the Parliament consequently. In summary, all these efforts are not solving land conflicts but making them worse and expanding them. Therefore, the government should halt implementing these existing individual land related laws (including their amendments), and instead legislate a new federal land law, which is more fundamental.

Farmers are life investors on the land; they feed the whole society across the generations. Land is the lifeblood for ethnic farmers and they deserve to manage the land received from and traditionally owned by their ancestors. The federal concept needs be applied and implemented in order to safeguard these customary land management practices. Customary systems nurture many farmer generations and support the peaceful development of the State. Therefore, in order to resolve in-county land affairs peacefully, it is crucial to let ethnic farmers, who are experts for these affairs, play a leading role in determining the fate of the land.

Land problems & conflicts continue to spread in various forms in different places across the country for several reasons; this means there is no single solution for resolving. What is needed is a democratic and inclusive approach that is capable of effectively fulfilling the peoples’ right to land in diverse situations and different contexts of the country. The existing land conflicts & struggles should be solved by enacting & implementing a national land law that fulfills the right to land and aligns with the Federal Union envisioned for Myanmar.

1.      The process of making new federal land law must enable the full and meaningful participation & inclusion of local ethnic peoples from different areas.
2.      The law must recognize and approve customary land management and uses that are good practices currently in use in ethnic regions.
3.      The law must fully recognize local peoples’ right to participate in decision making that affects their lives and that is free from centralized verdicts, in any land use judgments.