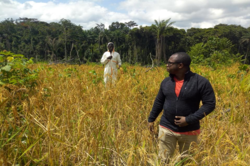 The Wee Statutory District Representative, Vicent Willie, told reporters that he and his partners from India and China have concluded talks to engage into large scale farming.
Front Page Africa | 19 November 2018

Lawmaker eyes mechanised farming in Grand Bassa County
Grand Bassa County – In Liberia, agriculture has become the primary source of livelihood for more than 60 percent of the population and provides sustenance for many households who engage in farming.
However, low agricultural productivity has resulted to the importation of more than 80 percent of the country’s staple food, making it vulnerable to global food price instability.  Poorly integrated, the sector lacks basic infrastructure such as farming equipment, farm-to-market roads and food storage capacity.
This, Grand Bassa County district #4 representative Vicent Willie says is hampering agriculture productivity. He’s urging farmers to integrate into the use of machines to increase production.
“We cannot continue using cutlasses and hoes to make farm. We need to change. Since JJ Roberts’ time, we’re still using cutlasses. We need to integrate into mechanised farming, where we can grow on a large scale,” Representative Willie asserted.
Representative Willie, a son of a farmer who is also involved in subsistence farming, has vowed to integrate into mechanised production.
He told reporters during a visit to his farm in Wee Statutory District that plans are underway to expand and improve the production of rice and other crops on the over 80 acres of farm lan has acquired.
“We were just testing this soil and it is proven that it is suitable for the production of rice. We tried other crops like plantain, banana, pumpkin and even bennesie, they all came up very good, as we speak, we have met with partners in India and China, they have expressed interest in investing in agriculture in my district,” he added.
Liberia’s subsistence farming makes it hard to compete on the market with cheaper food imports. Despite the high level of involvement by the local population in agriculture, the sector’s productivity remains low. This is becaus of limited technology and poor pest management, combined with the extremely limited use of fertilizer and other modern cultivation methods.
Increasing production through the use of agricultural machiner, according to Rep. Willie, will boost the agricultural sector and provide more employment.
The Wee Statutory District Representative told reporters that he and his partners from India and China have concluded talks to engage into large scale farming.
He disclosed that the foreign investors will arrive in the country shortly to carry out other studies though the soil has been tested and proven to be suitable for growing rice, pepper, onion, pumpkin etc.
“They are only coming to do some minor studies, but the main study is been concluded; the soil is tested like I said and we are ready to grow more food to even sell to the outside world.” Farmers in the country have expressed willingness to contribute significantly to food production to reduce the huge importation of rice but lack of farm to market road and storage facilities, according to them, are impediments.
But Grand Bassa County Representative Vicent Willie is hopeful that investing in a mechanised production will alleviate the constrains farmers face. He asserted “once this farm is open on a large scale with the use of machines to do the rest of the work, trust me! These roads will be open and paved. Storage facilities will be made available and we can even do packaging here. Our farmers will not go through the usual hurdles before.”
The lawmaker, who defeated former Representative Byron Brown in the 2017 Presidential and Legislative elections, is making frantic efforts to alleviate some of the major challenges in his constituency. Wee Statutory District, the largest and second most populated district in the county is heavily challenged with bad roads and inadequate health and educational facilities.
Currently, vast majority of the areas in the district are inaccessable despite the presence of the Liberian Agricultural Company, MNG Gold and several other concessional companies.
Representative Willie, in January this year, called for National consensus to ensure the audit and rectification of all concessions including the 1959 LAC concession agreement.
The Grand Bassa County district #4 Lawmaker said the 7 page LAC concession agreement does not meet any element of current reality.
Workers at the Liberian Agricultural Company have consistently complained of poor working conditions, low wages and demeaning  housing facilities but the company is doing little to remedy the situation.
“Let me be clear with you that the concession will be rectified. And there are ways we’re going to push, it’s not about fight. I will try my best, we are going to work together as a government to achieve most of what were not achieved in previous administration.
“We will lobby with our colleagues in parliament, they are one way or the other connected to the plantation and they are more interested in the rectification process”, he explained.
”I have visited the plantation several times and have seen the living conditions of my people, those conditions cannot be matched to present day reality”, he asserted.
He furthered that “a multi-million dollars company like LAC cannot have more than 7 family members in one little tight room and are still drinking from creeks in this modern era.”
Willie, the House’s Chairman on Lands, Mines, Energy and Natural Recourses, then blamed poor housing, low salaries and appalling working condition on the 59 year old agreement which is yet to be reviewed.
In 1959, owners of the now LAC plantation entered into an agreement with William V.S Tubman administration to begin a palm oil plantation that later turned into a rubber producing company.

Representative Willie said several components of the agreement including the 300 thousand acres of land offered the plantation, expert’s taxation and the Company’s corporate social responsibilities are key for rectification.

“The rectification process should not be seen by LAC as a negative one, this is not only about our people, it is also about them as a company. They need to know about the land they occupied. This process will provide them the proper demarcation of their land, this is why we want the company and the citizens to come on one drawing table to discuss the issue.”

Research suggests that the land given the plantation was not defined by the Tubman administration, but the agreement gives LAC the right to acquire 300,000 acres between the St. John and Cestos Rivers at an annual rate of 6 cents per acre.

Representative Willie has vowed to end all unfavourable labour practices at concession areas in the district, noting that violators will be brought to book.