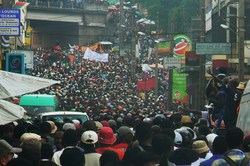 The breaking of the Daewoo story helped lead to the overthrow of the Malagasy government a few months later, and woke the world up to an outrageous new trend of global land grabbing for agricultural production driven by the food and financial crises. Photo: Fanalana Azy

On 18 November 2008, The Financial Times exposed a massive deal being negotiated between Daewoo Logistics and the government of Madagascar. Through this deal, the South Korean company was seeking access to no less than 1.3 million hectares to grow maize for export back home while the local communities were uninformed. The breaking of this story helped lead to the overthrow of the Malagasy government a few months later, and woke the world up to an outrageous new trend of global land grabbing for agricultural production driven by the food and financial crises.

Ten years later, what are we seeing?

For one, we are seeing that the number of land grabs for food and agriculture continues to grow. In 2016, GRAIN tallied 500 deals covering 30 million hectares in 70 countries, with half of the deals  in Africa. But the pace of land deals has slowed and many big projects have failed they went bankrupt, flopped or were stopped by community resistance. So to escape the social backlash, some investors are switching to more diffuse and subtle forms of land grabbing: contract farming, special economic zones, agropoles and infrastructure corridors. But any way you slice it, land concentration is increasing.

We are also seeing more clearly how violence and lawlessness underpin many of these deals. In 2016, the International Criminal Court broadened its mandate to include land grabbing as a “crime against humanity”, which it will now prosecute. In 2017, Global Witness recorded the highest number of land defenders being killed on the ground, pointing out that the #1 driver was agribusiness. This past year several corrupt politicians and businessmen were thrown in jail for grabbing large swaths of farmland to launder illicit funds. The human price tag is rising.

On the ground, though, we are witnessing immense hope. People are organising and building alliances to expose these projects and recover control of their lands. Across West Africa, women displaced by oil palm plantations run by Asian conglomerates like Wilmar, Olam, Golden Agri-Resources and others are learning from each other, building strategies together and gaining the voice and strength to lead the fight. Communities living adjacent to giant farms funded by European groups Socfin and Bolloré have formed an alliance to pressure the investors to heed their demands for unpolluted water, decent working conditions and the return of their lands. In the Democratic Republic of Congo, villagers resisting the 100,000 hectare Feronia oil palm operation, formerly held by Unilever, are challenging the very legality of the project in a complaint to the European governments backing it.

More examples abound, including from Asia, Europe and the Americas. But the bottom line message is that we have to do more to stop these large-scale land deals at the source. None of them are feeding local populations – they are mostly fuelling conflict, dispossession and abuse.

Back in Madagascar, time appears to have stood still. Daewoo Logistics is still present in the country, lurking behind another name. Their botched land bid has haunted the current election cycle, as the same politicians who pushed for and against the deal ten years ago were vying for the presidency once again. As Malagasy communities bravely struggle against several other land grabs, less monstrous than Daewoo’s attempt, we hope that history won’t repeat itself and that the new regime resists any further temptation to lease off the country’s resources for the benefit of a few.